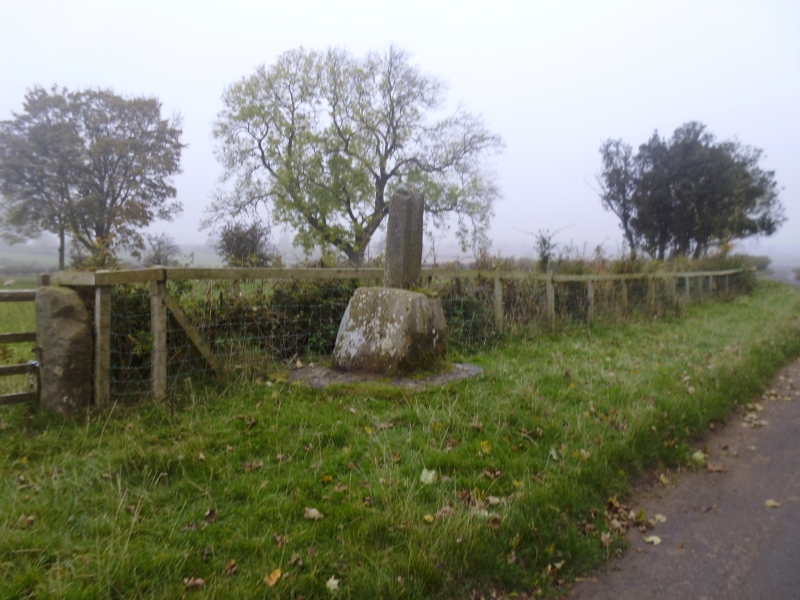 The monument includes a wayside standing cross known as High Cross on the lane
from Lastingham to Appleton-le-Moors. It consists of a massive cross base of
local sandstone and a portion of a shaft of the same stone set in the base.
The cross is set on a modern plinth of sandstone and cobbles. The cross stands
in its original position on the west side of the road, opposite the entrance
to a drove road called Wensdale Lane.

The plinth is polygonal and is 2m wide on its north-south axis. The base
is 0.73m high and at the bottom is 0.9m across and 0.71m deep. This tapers to
0.64m wide and 0.57m deep at the top. The cross shaft is in a socket and
secured with lead. The shaft shows 0.97m above the base and is rectangular in
section 0.36m by 0.21m where it meets the base. The shaft is chamfered on the
corners and worn.

The massive base and slender chamfered shaft indicate a cross which may
originally have stood 3m high. The proportions suggest an important way marker
on the road to Lastingham and a focus of worship in the medieval period.

The surface of the road is excluded from the scheduling but the ground beneath
it is included.

The High Cross wayside cross survives well in spite of the loss of the head
and part of the shaft. Although it has been re-erected in modern times it
stands in its original position. It stands on Kirkgate Lane, the old route
which leads to the early medieval church at Lastingham. It forms part of a
relict medieval landscape in which the crofts of the village of Appleton
survive and the surrounding strip cultivated fields are defined by the later
enclosure boundaries.