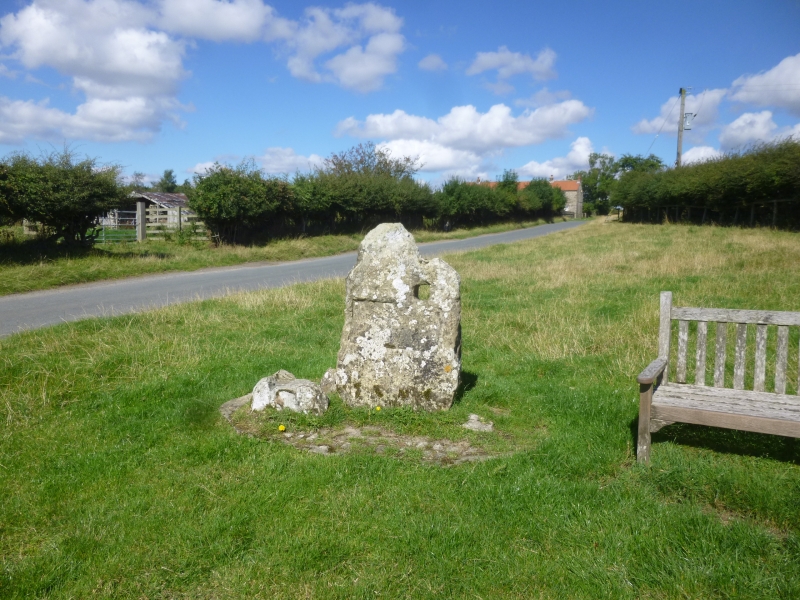 The monument includes a standing stone known as Low Cross on the junction of
Kirkgate Lane and Hamley Lane in the village of Appleton-le-Moors.

The monument consists of a slab of eroded limestone set upright on a modern
cobbled plinth 3m from the road edge and on a wide verge. Set into the cobbles
around the slab are six boulders in a cluster.
The slab stands 1.27m high and is 0.81m wide at the base and 0.32m thick on
average. The south face has a rectangular indentation cut halfway up the slab
as if to take a plaque. Under the shoulder of this face and on the east side
is a square hole cut through the stone 0.11m wide.
The boulders suggest that broken pieces of the original monument have been
preserved here. The broken pieces vary in size from 0.54m to 0.18m wide.

The name Low Cross given to this monument and its association with High Cross
to the north suggest that the stone has been given a Christian identity as a
wayside marker to identify the road to Lastingham in the medieval period.
Standing stones are frequently adopted in this way and found in graveyards and
other contexts in Britain. The hole and the cut for a plaque are more recent
and may have been for a toll bar at this point.
The stone, the boulders and the modern plinth are included in the scheduling.

This standing stone has been reused as a wayside cross. Wayside crosses were
erected during the medieval period and served the function of reiterating the
Christian faith to those who passed the cross and of reassuring the
traveller. They also served as waymarkers. In this instance the cross marked
a well travelled route linking important settlements for such functions as
funeral processions.

Wayside crosses contribute significantly to our understanding of medieval
religious customs and of medieval routeways and settlement patterns. All those
crosses which survive as earthfast monuments, except those which are badly
damaged and removed from their original locations, are considered worthy of
protection.

The stone known as Low Cross is associated with High Cross in medieval
documents. Although there is no trace of a cross head or Christian carving on
the stone, the location is original and its use as a wayside cross is
undisputed.