A Scheduled Monument in Tong, Shropshire 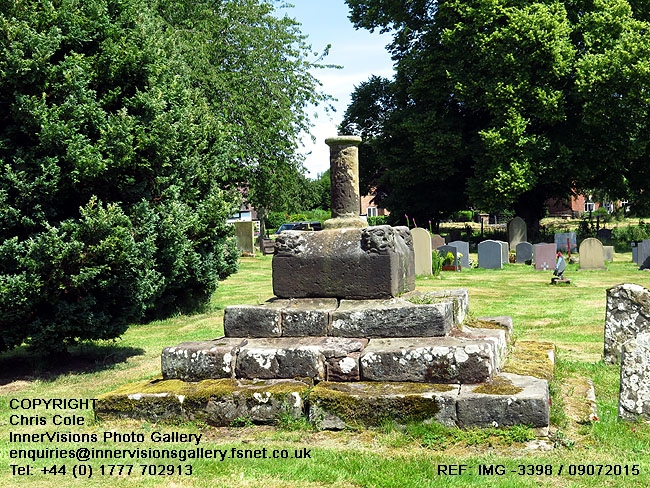 The monument includes a standing stone cross located in the churchyard of St
Bartholomew's Church, Tong, c.6m south of the south chapel. The cross takes
the form of a stepped base, socket stone and shaft, all of 15th century date,
and is Listed Grade II*.
The base includes four steps of square plan, 3.5m in width. The cross has
susbsided slightly so that the bottom step is flush with the ground, and the
base has a maximum height of 0.7m. All the steps are well worn. The
socket stone is square in plan with sides of 0.7m and is 0.5m high. The upper
surface is chamfered and the corners are engraved with large faces, except the
north east corner which is missing. The shaft has a width of 0.3m at its
square base, and a low stump remains. Close to the base the shaft has been
remodelled to a cylindrical form, to accommodate an 18th century sundial which
was last recorded in-situ in 1975.
The grave markers to the south of the cross are excluded from the scheduling,
although the ground beneath them is included.

The cross in St Bartholomew's churchyard is a good example of a medieval cross
with a stepped base and decorated socket stone. Limited activity in the area
immediately surrounding the cross suggests that archaeological deposits
relating to the monument's construction and use in this location are likely to
survive intact. While elements of the cross have survived from medieval times,
the remodelling of the shaft and its use for a sundial illustrates its
continued function as a public monument and amenity.