A Scheduled Monument in Stanton, Gloucestershire 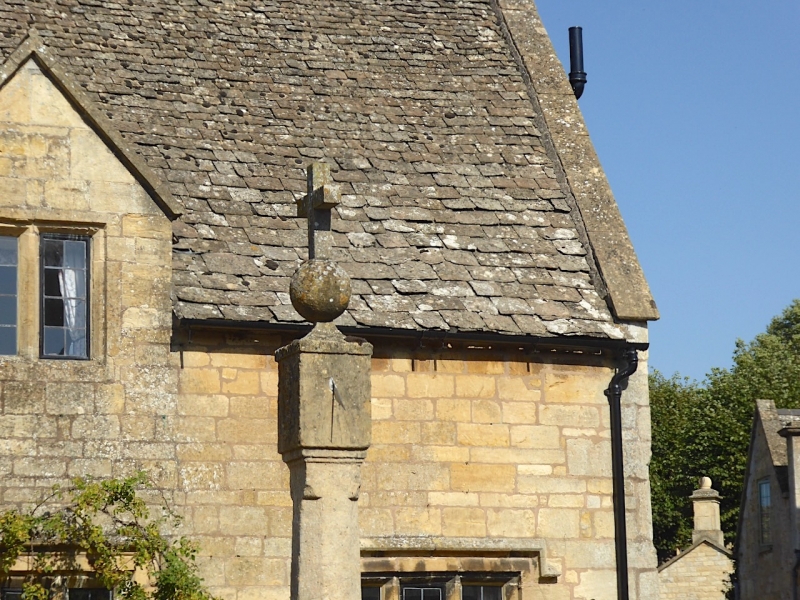 The monument includes a village cross on a three step calvary, situated on the
roadside in the village of Stanton. The cross is complete and sits on a
junction of the High Street with Church Lane.
The cross includes a three step calvary, socket stone, shaft, thickened
terminal and head. The first step of the calvary has mouldings at top and
bottom. It is 2.3m square and 0.6m high; the next step is 1.65m square and
0.2m high, and the third step is 1.15m square and 0.15m high. Above this the
socket stone is 0.6m square at its base brought up to an octagonal shape by
broaches with flat outlines. The socket stone is 0.4m high. The socket in
which the shaft is embedded is 0.3m square. The shaft, with broaches at its
base, is an octagon, c.1.4m high, surmounted by a sundial, ball and cross.
The stone blocks of the calvary and the socket are medieval, but the shaft and
head are later. The cross is Listed Grade II.
Excluded from the scheduling are the kerb stones and the metalled road surface
where they fall within the cross's protective margin, although the ground
beneath these is included.

Despite the shaft and head being later than the calvary and socket stone, the
village cross at Stanton survives well with many of its original elements
intact in what is likely to be its original location beside the road. Its
position on the roadside makes it an imposing monument and the kerb serves as
protection from passing traffic.

Books and journals
Pooley, C, Notes on the Old Crosses of Gloucestershire, (1868), 55