A Scheduled Monument in Buckland, Gloucestershire 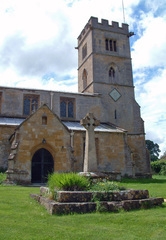 The monument includes a restored standing cross situated in the churchyard at
Buckland c.8m north of the church.
The cross has a square two step calvary, a socket stone, and restored shaft
and head. The base of the calvary is 3.4m square and 0.2m high; the second
step is 2.75m square and 0.25m high. Above this the square socket stone, which
has a deep drip moulding on its upper face, is 0.9m square at its base and is
0.6m high. The restored shaft, square at the bottom, sits in a socket
which is 0.35m square. Above this it tapers, with square section, to the
restored head. The shaft is c.2m high. At the top of the shaft is a thickened
terminal which appears to be of more recent construction. The head is in the
shape of a Celtic cross.
The calvary is constructed from stone blocks. The socket stone is hewn from
one piece of stone. It is considered that the calvary and socket stone are
late 14th century.

The churchyard cross at Buckland is believed to be in its original position.
Despite the restored shaft and head, the cross survives well as a visually
impressive monument essentially of the medieval period and relates to the 13th
century church in whose precinct it lies.

Books and journals
Pooley, C, Notes on the Old Crosses of Gloucestershire, (1868), 20