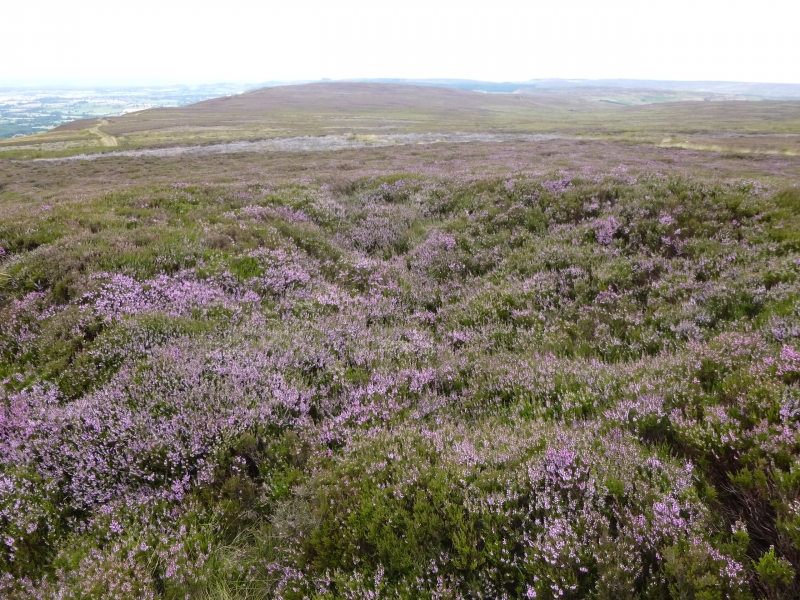 The monument includes a group of three round barrows situated in a prominent
position on the north of the North York Moors.
The barrows are 30m apart and aligned south west to north east. They each have
a round turf and stone mound. The south west barrow has a mound standing 1m
high and 13m in diameter. The central barrow has a mound 0.8m high and 9m in
diameter. The northern barrow mound is 1m high and 15m in diameter. The
barrows were partly excavated by R S Close in 1956. The south west mound
was found to be constructed with a central cairn of boulders and stones
covered with layers of turf. Remains of a cremation burial and fragments of
pottery were found within the mound. The central barrow was found to be
defined by a stone wall two-three courses high and up to 0.9m thick
surrounding and partly retaining a mound of stone and layers of turf. Within
the mound a square stone cist or coffin containing remains of a human
cremation and fragments of pottery was found. The whole of this was covered
with stones and layers of turf. The north east barrow was found to be
constructed of a turf mound surrounded by a circular kerb of upright stones
set at intervals with layers of turf covering the whole. No ditches were
recorded surrounding the barrow mounds and it is thought that the construction
material was collected from loose stone and turf in the vicinity. The south
west barrow has been partly disturbed on the west side by the extraction of
material for road building.
There are many similar barrows in this area of the North York Moors. Many
are part of groups particularly along the watersheds or other prominent
locations, which indicates that the barrows, as well as being funerary
monuments, also represent territorial markers defining divisions in land.
These divisions still remain as some parish or township boundaries.

Despite limited disturbance these barrows have survived well. Part excavation
has confirmed that archaeological remains survive well. Significant
information about the original form of the barrows and the burials placed
within them will be preserved. Evidence of earlier land use will survive
beneath the barrow mounds.
Together with other barrows in the vicinity these barrows are also thought to
have represented territorial markers. Similar groups of monuments are also
known elsewhere in the west and central areas of the North York Moors,
providing important insight into burial practice. Such groupings of monuments
offer important scope for the study of the division of land for social, ritual
and agricultural purposes in different geographical areas during the
prehistoric period.