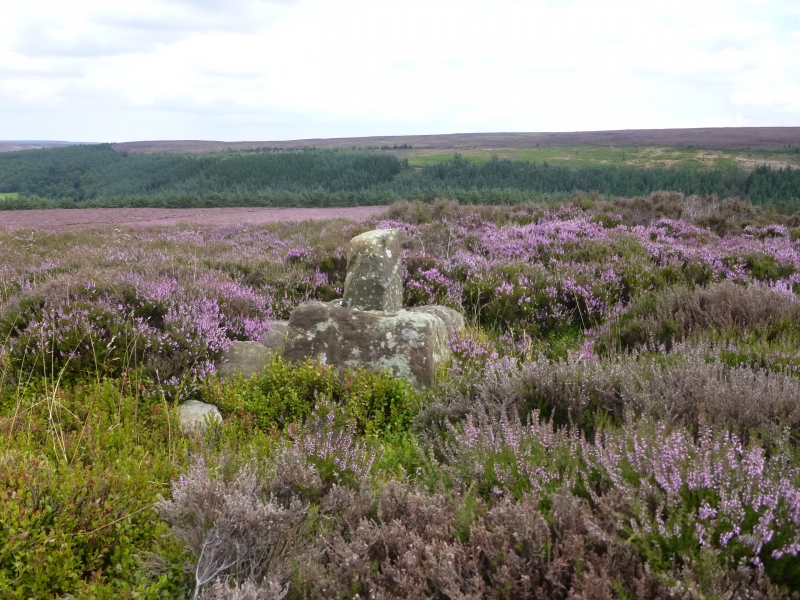 The monument includes a wayside cross called Baysdale Cross on the moor to the
south west of Baysdale Abbey. The cross stands 10m west of a trackway which
used to link the abbey with Bransdale to the south and is still visible as a
flagged trod (packhorse track) to the south of the cross for about a mile.

The monument comprises a cross base, cross shaft fragment in the socket and a
portion of shaft with two broken cross arms beside it to the west. The base is
of banded gritstone measuring 0.62m by 0.53m at ground level, tapering to
0.56m by 0.49m at its top. The base is 0.39m high. The socket hole measures
0.32m by 0.21m. Inserted in the socket is a portion of a cross shaft measuring
0.27m by 0.21m at the bottom and 0.41m high. There are traces of a roll
moulding on the corner edges of the west face of this fragment. Another piece
of the shaft, with this roll moulding on two sides lies in the heather to the
west. This piece is 0.25m by 0.17m and 0.36m long with a taper to match the
base of the fragment in the socket. There are two further fragments of dressed
stone which are shaped to look like the arms of a cross and would fit the
dimensions of the shaft. These pieces are 0.25m by 0.23m by 0.16m and 0.23m by
0.17m by 0.16m.
In all the cross is almost complete, although in pieces. It would have stood
about 1.4m high from the base.

The cross dates from the medieval period.

The fragment of the shaft and the two fragments of the arms on the ground are
included in the scheduling as is the ground beneath the monument.

The Baysdale wayside cross survives well in spite of the fragmentary nature of
its condition. It is one of a medieval type which can be dated to the 12th
century by reference to the cross known as Old Ralph in Westerdale. It also
provides important insights into the management of the medieval landscape and
the faith of the Christians who erected it beside the road.