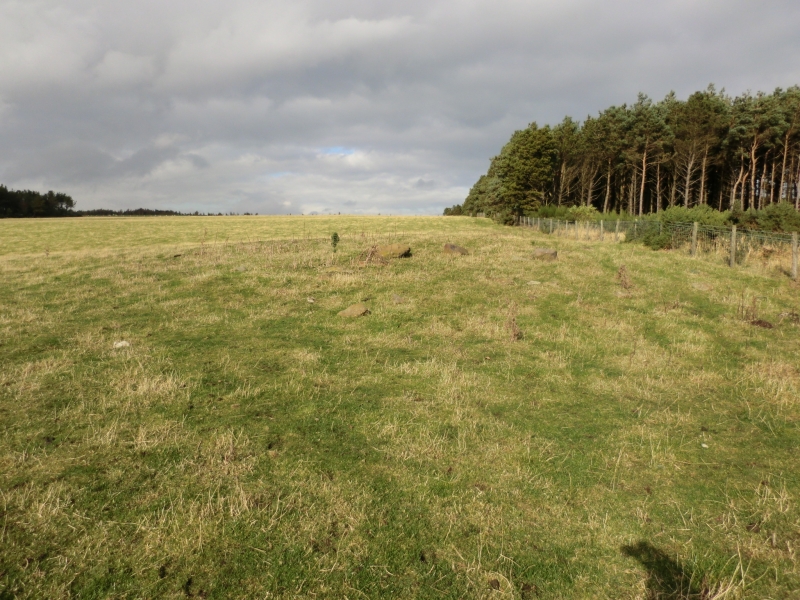 The monument includes a large bowl barrow of Bronze Age date situated on a
south-facing slope. The barrow mound measures 21m in diameter and survives to
a height of 50 cm. This monument is of unusual form; at its centre there is a
smaller mound measuring 4m in diamater and standing to a height of 1m. The
platform area between the central mound and the edge of the barrow is slightly
concave in profile. The surrounding ditch, dug to provide the material to
build the mound, is no longer visible at ground level but it survives as a
buried feature measuring 2m across. The eastern edge of the barrow and its
ditch has been truncated by the forestry plantation and does not survive
beyond the fence. The fence line is excluded from the scheduling.

The barrow is well preserved and the archaeological deposits survive
undisturbed. Evidence of the manner of construction, and the nature and
duration of use will be preserved within and beneath the mound and within the
ditch. Additionally, evidence relating to the Bronze Age environment around
the monument and of the wider landscape will also survive. This barrow is of
an unusual form and indicates the variety and complexity of Bronze Age
funerary monuments. The importance of this monument is increased because of
the survival of contemporary barrows in the vicinity; such evidence provides a
clear indication of the extent of Bronze Age settlement and activity in the
area.