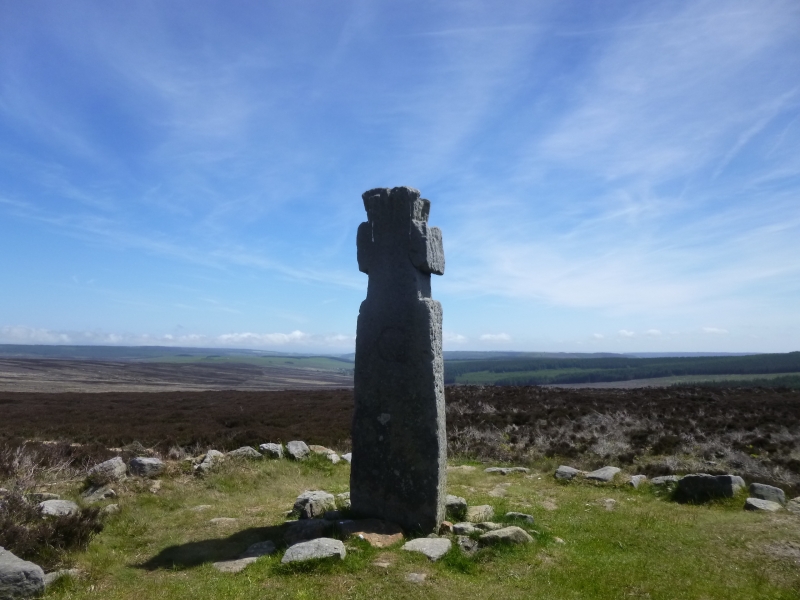 The monument includes a standing cross on a bowl barrow on Fylingdales Moor,
both of which are included in the scheduling. The cross stands at the
junction of four medieval parishes and on the junction of the Old Salt Road
and the Pannierman's Way, both medieval trackways linking Whitby with Robin
Hood's Bay and Pickering. It also marked the bounds of an estate belonging to
Whitby Abbey in AD 1078.

The monument comprises a standing cross which is earthfast. The cross is
complete and carved out of a single slab of local medium-grained gritstone. It
stands 2.2m high and at the base measures 0.59m wide and 0.32m thick. From
the ground the slab tapers slightly to shoulders at 1.65m surmounted by a
Maltese cross head 0.55m high and 0.49m wide. The shoulders are only 0.07m
deep.

On the north face of the cross head is a letter G and on the south face a
letter C with a cross cut beneath it. These are later additions to mark estate
boundaries. Also on the west side are some graffiti.

The cross stands in its original position although moved and re-erected in
1962. It is of a late Anglo-Saxon type, probably of the 10th century. It is
mentioned as a boundary in a Whitby charter of AD 1078-1120 granting them
lands from the Percy family. It also marks the junction of four medieval
parishes; Allerston, Fylingdales Moor, Goathland and Lockton. It stands on the
junction of two medieval trackways and therefore serves as a waymarker.

The cross stands on a bowl barrow built of large stones and earth. The barrow
was reused for burials in the Anglo-Saxon period and at least one of these
produced objects of Scandinavian type when excavated.

The barrow has been badly damaged by tourists making cairns and stone shelters
from the stones of the monument. It measures 20m in diameter and stands 1.25m
high. It has been clipped on the north side by the erosion of the footpath
beside it.

Bowl barrows are funerary monuments dating from the Late Neolithic period to
the Late Bronze Age and most examples date from the period 2400-1500BC. They
were constructed as earthen or stone mounds, sometimes ditched which covered
single or multiple burials. They often occupy prominent locations and hence
have remained important elements in the landscape. Occasionally this led to
their reuse at later periods. Their considerable variation in form and
longevity as a monument type provide important information on the diversity of
beliefs and social organisation amongst early prehistoric communities. A
substantial proportion of surviving examples are considered worthy of
protection.

Lilla Cross standing cross is primarily important as a boundary marker for the
lands of the abbey at Whitby. It also may be a commemoration of an Anglo-Saxon
noble but not Lilla since the style of the cross is from the tenth century and
Lilla was a hero of the eighth. Since it was selected as the boundary of four
medieval parishes it has additional importance and helps us understand the
date of the formation of the parish system in this area. It is also a
waymarker for two medieval packhorse roads.

The barrow has been partly excavated and reveals an assemblage of Anglo-Saxon
and Viking grave goods. This shows that both the cross and the burials played
an important part in the early medieval Christian perception of the landscape.