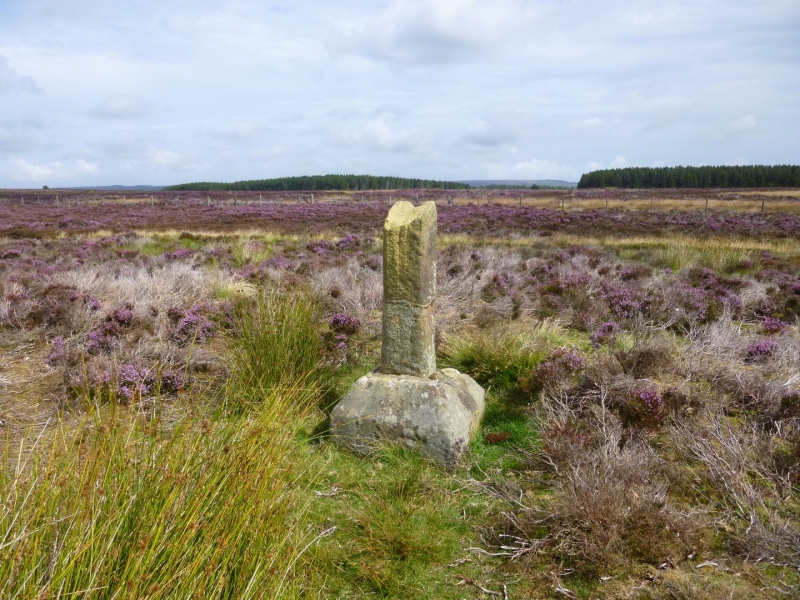 The monument includes a medieval wayside cross known as Ann's Cross and the
bowl barrow on which it is set on Sneaton High Moor. The cross marks an old
way known as the Pannierman's Causeway from Hackness to Whitby. The cross is
Listed Grade II. Both the cross and barrow are included in the scheduling.
The cross consists of a base and shaft made of fine yellow sandstone. The base
is squared and is 0.76m wide and 0.51m high. At a point 0.31m above ground the
base has been chamfered to the socket. The socket is 0.36m wide at the east
face and 0.28m wide at the north face. The shaft is poorly fitted into the
socket and is 0.27m wide on the east face and 0.24m wide on the north face.
The shaft is 1.04m high and broken off at the top. This is also broken and
repaired at a point 0.56m below the apex. Beside the cross is a portion of
the broken shaft showing the slight curve of the cross head on one edge. This
stone is 0.36m wide and partly embedded in the ground.
The cross is set into the top of a bowl barrow which is 18m in diameter with a
ditch 2m wide around the base. There are faint traces of a stone kerb at the
base of the barrow. The barrow mound is 1.2m high.
The cross marks the way known as the Pannierman's Causeway as well as marking
the boundary between the medieval parishes of Goathland and Sneaton.

Bowl barrows are funerary monuments dating from the Late Neolithic to the Late
Bronze Age with most examples belonging to the period 2400-1500 BC. They were
constructed as earthen or rubble mounds, sometimes ditched, which covered
single or multiple burials. Their considerable variation in form and
longevity as a monument type provide information on the diversity of beliefs
and social organisation amongst early prehistoric communities. A substantial
proportion of surviving examples are considered worthy of protection.
Ann's Cross wayside cross survives well with the fragment of the head to
indicate its type and style. It marks one of the medieval routes known as the
Pannierman's Causeway which connected Hackness and Whitby.