A Scheduled Monument in Kendal, Cumbria 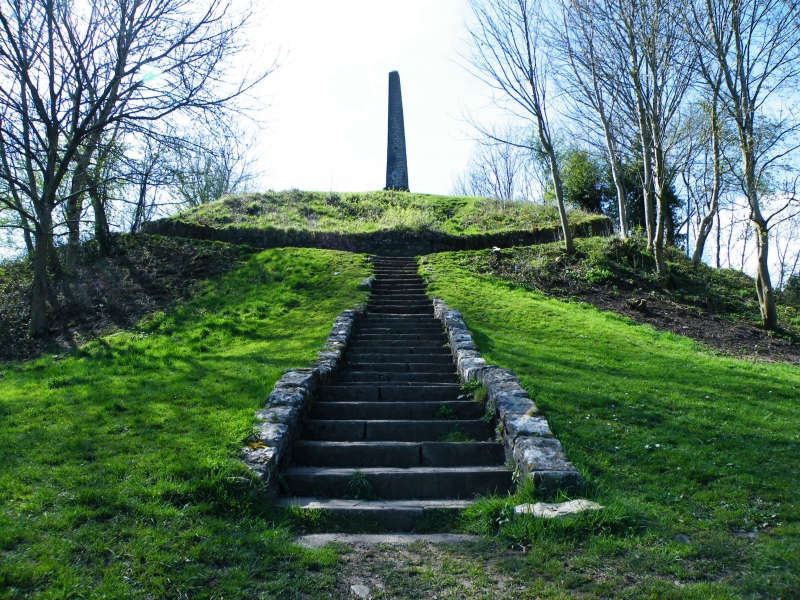 The monument includes Castle Howe motte and bailey castle in Kendal. The site
is strategically situated on a hillside spur overlooking the Kent valley and
the town of Kendal, and includes a round flat-topped motte 11m high which
measures c.18m in diameter across the summit and approximately 46m in diameter
at the base. It is surrounded on the north and south sides by a ditch up to 7m
wide by 1.5m deep which has been cut across a tongue of limestone bedrock.
Some of the upcast from this ditch has been used to form a rampart or bank up
to 5m wide and 1m high on the outside of the ditch to the north of the motte.
To the east of the motte there is a triangular bailey, known locally as
`Battle Place', which is protected by steep natural slopes on the east and
south sides.
The motte and bailey was constructed in the latter years of the 11th century
for the barony of Kendal and was occupied by Ketel, son of Eldred, in 1092.
The summit of the motte was surrounded by a breastwork, traces of which have
now disappeared above ground level. As additional protection for the bailey a
terrace was cut some 12m below the level on the steep slope to the east. This
terrace has now become a road called Garth Head. The motte and bailey was
probably abandoned about 1184 when a stone castle was built on the opposite
side of the valley.
A number of features are excluded from the scheduling; on the summit of the
motte these include an obelisk, and a bench and the concrete setting in which
the bench is fixed; elsewhere the motte retaining wall and all other walls and
railings are excluded, as are all telegraph poles and the surfaces of all the
paths; the ground beneath all these features is included.

Despite landscaping of the bailey to create a public park, Castle Howe motte
and bailey survives reasonably well. It is of particular importance as being
one of a group of early post Conquest (late 11th century) motte and baileys
established along the river valleys of north west England. These sites were
all of strategic importance allowing control of movement along the river
valley. More importantly, however, was their role in imposing and
demonstrating the new post Conquest feudal order on the area.