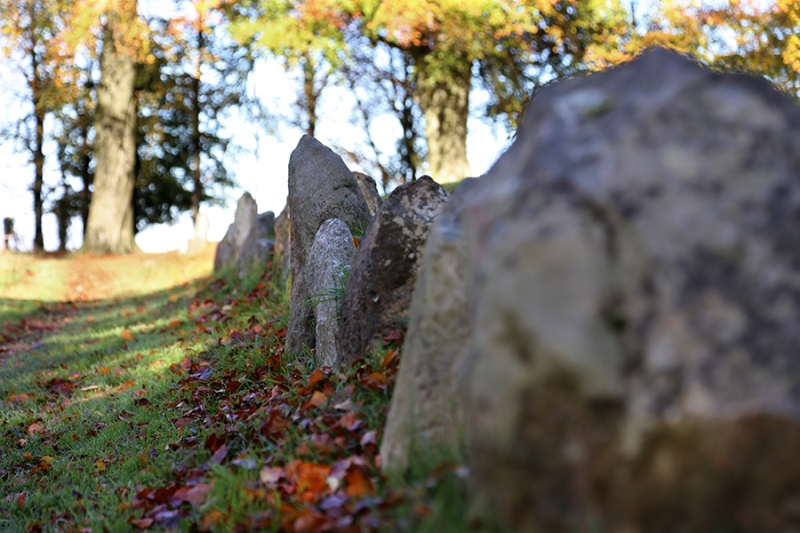 The monument includes a Neolithic chambered long barrow known as Wayland's
Smithy which was built over an earlier wooden and earthen funerary chamber, as
well as two field boundary ditches dating from the Iron Age and the
Romano-British periods. The monument is situated 50m north of the Ridgeway
ancient track, c.1km west of Whitehorse Hill.

The main focus of the monument is a partially reconstructed stone-faced chalk
mound 56.4m long and up to 13.1m wide with a facade at its south end. This
faces south and consists of a dry stone wall against which are set four large
sarsen stone orthostats which stand up to 3m above present ground level. In
the centre of this face is located the entrance to a narrow stone-lined
passage 1.8m high which runs 6m into the mound. This passage has two small
side chambers which have a cruciform plan. The remains of at least eight
partial skeletons were found when the mound was first excavated although
disturbance of the chamber in the Roman period probably removed the evidence
of other primary burials. The mound itself is edged by sarsen kerb stones
c.0.3m high and a low bank of rubble set against their inside faces. The mound
itself is formed of chalk rubble and turf. Flanking the mound, but no longer
visible at ground level, are two quarry ditches from which material was
obtained during its construction. These were deliberately infilled in
antiquity and survive as buried features 56m long and up to 4.5m wide. They
are separated from the mound by a berm c.8m wide. Partial excavation of the
site in 1963-4 identified a second, smaller, earlier mound beneath the visible
barrow. This mound measured 16.5m long and 8.2m wide and excavation showed it
to survive to a height of 0.9m incorporated into the make-up of the later
mound. Originally, however, it would have stood up to 1.8m high. This mound
was revetted by a kerb of sarsens c.0.9m high which were leant against the
side of the mound, rather than being set into the ground. The mound itself
consisted of a basal cairn of sarsen boulders c.0.3m in diameter on which
chalk taken from the two flanking ditches was placed. These survive adjacent
to the earlier mound but are buried beneath the larger later mound. These
measure c.17m in length and up to 3m wide.

This cairn covered a complex mortuary structure set on a sarsen pavement 4.9m
long by 1.5m wide. Large posts were placed at the northern and southern ends
in 0.9m deep postholes and stone banks were built on the east and west sides.
A ridge pole was socketed to the two posts, and sarsen slabs and timber (laid
horizontally) formed an enclosed tent-like chamber 1.4m high. This contained
the skeletal remains of at least 14 individuals, mainly youths but including a
child of about nine years old.

Excavations at the site have also identified an Iron Age ditch running from
north to south, situated to the west of the barrow. This ditch cut across the
southern terminal of the western flanking ditch of the larger mound. It
measures c.6m in width and is known to run beyond the site to the north and
south. A bank was formed on its eastern side and incised pottery has been
recovered from its base. This ditch silted up and was recut in the Roman
period to a width of c.4m. At this date a further ditch, c.4m wide, was cut
around the south eastern side of the forecourt to the barrow and this ran
across the end of the terminal of the eastern flanking ditch. At this date the
Ridgeway path ran immediately south of the barrow mound and, later in the
Roman period, the ditch section in front of the facade was infilled with
sarsen boulders to widen the track. Later still the Roman farmers infilled the
ditches and the whole area, including the northern end of the barrow, was
cultivated.

Excluded from the scheduling are the Ministry of Works sign and the
surrounding boundary fence, although the ground beneath these features is
included.

Wayland's Smithy chambered long barrow is a well known, much visited and
outstanding example of the Cotswold Severn style of Neolithic funerary
monuments. Partial excavation of the site in 1963-4 has enhanced our
understanding of it as well as demonstrating that archaeological and
environmental evidence will survive relating to its construction, the
landscape in which it was built, and the extent to which the area was reused
in the Iron Age and Roman periods.

The Wayland's Smithy long barrow is particularly unusual in providing evidence
for an early burial mound being later incorporated into a larger example. The
precise relationship of the two mounds has been well documented by their
partial excavation.