Uffington Castle: a univallate hillfort immediately north of the Ridgeway on Whitehorse Hill 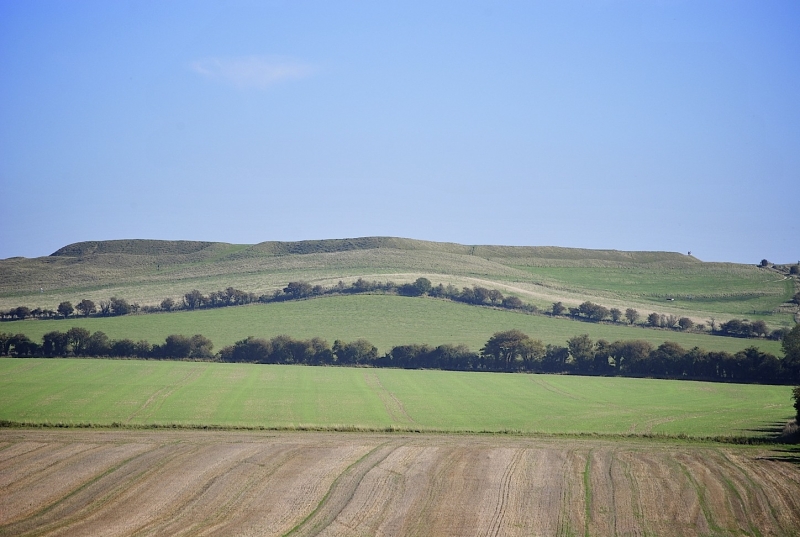 The monument includes a large Iron Age univallate hillfort known as Uffington
Castle, situated immediately north of the Ridgeway on Whitehorse Hill. The
hillfort has an internal enclosure covering 3.2ha with maximum dimensions of
220m from west to east and 160m from north to south. This is surrounded by a
single bank c.12m wide and c.2.5m high inside a ditch 15m wide which is now
partially infilled but which survives as a grass covered feature c.3m deep.
This is surrounded by a counterscarp bank c.8m wide and up to 1m high.

The hillfort has a single entrance to the west in the form of a causeway
flanked by the out turned ends of the inner rampart. These then turn back
around the terminal ditch ends to join the counterscarp bank. The site has
been the subject of a number of partial excavations, notably in 1850 and 1990,
and it is known from this that the rampart and gateway had several phases of
construction. The main rampart consisted of timber bracing and chalk rubble
with the inner face lined with sarsen stone. Recent geophysical survey work
has shown that evidence of further features, including postholes and pits,
survive in the interior of the hillfort, despite it having been ploughed in
the Middle Ages and containing earthworks representing ridge and furrow
cultivation.

The monument is closely associated in local tradition with the White Horse
hill figure nearby, while pottery and coins from the period of the hillfort's
occupation have been found on the burial monuments further down slope.

Uffington Castle survives as a well known and outstanding example of its
class. Our understanding of the monument has been enhanced by partial
excavation and geophysical survey from which the site is known to contain
archaeological and environmental evidence relating to its construction and the
landscape in which it was built. This is one of a number of monuments on
Whitehorse Hill which represent an unusual grouping of secular and burial
sites dating from the Neolithic to Saxon periods. Together these provide
an insight into changes in religious and secular needs and beliefs over a
period of more than four thousand years.