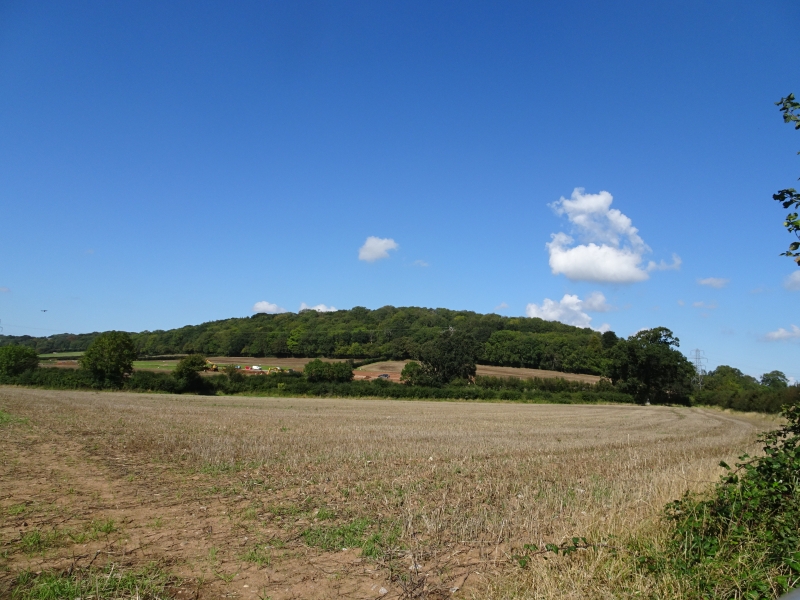 The monument includes a large multivallate hillfort situated on Banwell Plain,
a carboniferous plateau overlooking the Somerset Levels.
The hillfort has a sub-oval gently sloping interior with maximum dimensions of
250m from north to south and 400m from east to west enclosed by earthen
ramparts. Within the interior are two smaller enclosures and a burial mound.
Of the two enclosures, the smallest is c.7 acres in extent and occupies the
eastern summit of the hill; it is defined by a bank c.0.5m high and c.1m
across flanked by a shallow and intermittent external quarry ditch. A second
enclosure c.15 acres in area is defined by an earthwork of similar
proportions. It is thought that these features may represent the development
of small Early Iron Age settlements into a progressively larger and defendable
site.
A mound central to the interior of the hillfort represents a barrow or burial
site. This survives to a height of 0.5m and is c.8m across. Surrounding the
mound is a ditch from which material was quarried during its construction.
This has become largely filled-in over the years but survives as a slight
earthwork c.1m wide and 0.5m deep. Partial excavation of the barrow in 1959
produced Iron Age pottery and associated flintwork suggesting that the barrow
may be contemporary with the hillfort or with the two earlier settlement
enclosures. Excavation also suggested that the barrow was later re-used as
the site of a post-medieval building.
The hillfort is defined by a rampart c.1.5m high and c.5m wide, surrounded by
a ditch c.1m deep from which material was quarried during the construction of
the bank. The ditch is flanked by sections of an external bank c.0.5m high on
the northern, southern, and eastern sides of the site. This is likely to have
been designed as a counter-scarp to further enhance the defences of the site
at the points where it was most vulnerable. There are three entrances to the
site but the original is most likely to be in the south-west.
Partial excavations at the site in 1958 by J Hunt recovered Early Iron Age
pottery from the inner rampart. Additional finds from the site include
Palaeolithic, Neolithic and Bronze Age flintwork and a bronze looped palstave.
All fence posts relating to the field boundaries are excluded from the
scheduling, although the underlying ground is included.

Large multivallate hillforts are defined as fortified enclosures of between
5ha and 85ha in area, located on hills and defined by two or more lines of
concentric earthworks set at intervals of up to 15m. They date to the Iron
Age period, most having been constructed and used between the sixth century BC
and the mid-first century AD. They are generally regarded as centres of
permanent occupation, defended in response to increasing warfare, a reflection
of the power struggle between competing elites.
Earthworks usually consist of a rampart and ditch, although some only have
ramparts. Access to the interior is generally provided by two entrances
although examples with one and more than two have been noted. These may
comprise a single gap in the rampart, inturned or offset ramparts,
oblique approaches, guardrooms or outworks. Internal features generally
include evidence for intensive occupation, often in the form of oval or
circular houses. These display variations in size and are often clustered,
for example, along streets. Four- and six-post structures, interpreted as
raised granaries, also occur widely while a few sites appear to contain
evidence for temples. Other features associated with settlement include
platforms, paved areas, pits, gullies, fencelines, hearths and ovens.
Additional evidence, in the form of artefacts, suggests that industrial
activity such as bronze- and iron-working as well as pottery manufacture
occurred on many sites.
Large multivallate hillforts are rare with around 50 examples recorded
nationally. These occur mostly in two concentrations, in Wessex and the Welsh
Marches, although scattered examples occur elsewhere.
In view of the rarity of large multivallate hillforts and their importance in
understanding the nature of social organisation within the Iron Age period,
all examples with surviving archaeological potential are believed to be of
national importance.

The large multivallate hillfort on Banwell Plain survives well and is known
from partial excavation to contain archaeological and environmental
information relating to the monument and the landscape in which it was
constructed. This is the western example of three hillforts occupying
outcrops of carboniferous limestone on the north-western fringe of the Mendip
Hills and together these will provide a detailed insight into the Iron Age
societies of the area, their economy and political structure.