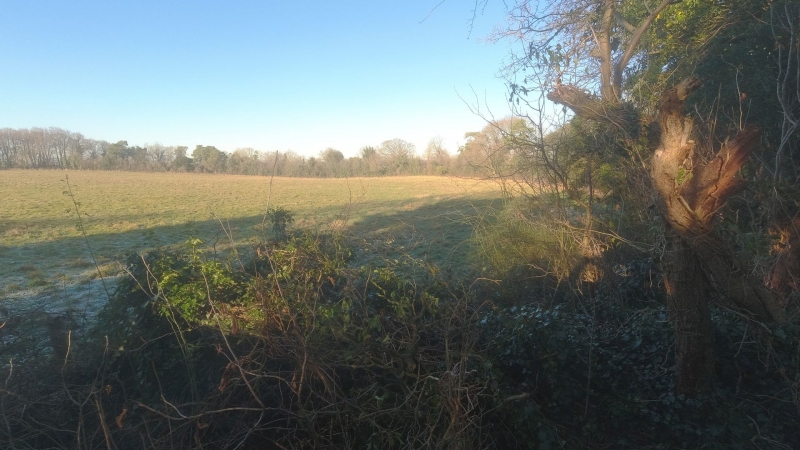 The monument includes an Iron Age univallate hillfort, that later developed into a bivallate hillfort, surviving as earthworks and below-ground remains. It is situated on the summit of a hill overlooking the confluence of the Rivers Anton and Anna (Pilhill Brook) to the ENE at Upper Clatford. The hillfort has two distinct phases; an earlier univallate fort enclosing about 9.8 hectares and a second bivallate fort enclosing about 4.75 hectares. The early fort was delimited by a bank and external ditch but only a scarp is now visible up to about 2.4m high to the north and west of the later bivallate works. Partial excavation has indicated that the ditch survives as a buried feature 3.5m deep with a flat bottom about 0.75m wide and 6.1m wide at the top.

The site was partially excavated in 1939 and 1990 and geophysical survey was carried out in 1990 and 1997. This has indicated that settlement remains survive below-ground within the interior of the hillfort. These include a trackway crossing the interior towards the north, several large pits, several animal burials and a possible cart or chariot burial. The univallate enclosure is thought to date to between the fifth and third centuries BC and the later work is considered to date between the second and first centuries BC, and possibly into the first century AD.

Large univallate hillforts are defined as fortified enclosures of varying shape, ranging in size between 1ha and 10ha, located on hilltops and surrounded by a single boundary comprising earthworks of massive proportions. They date to the Iron Age period, most having been constructed and used between the fourth century BC and the first century AD, although evidence for earlier use is present at most sites. The size of the earthworks reflects the ability of certain social groups to mobilise the labour necessary for works on such a monumental scale, and their function may have had as much to do with display as defence. Large univallate hillforts are also seen as centres of redistribution, both for subsistence products and items produced by craftsmen. The ramparts are of massive proportions except in locations where steepness of slope precludes easy access. They can vary between 6m and 20m wide and may survive to a height of 6m. The ditches can measure between 6m and 13m wide and between 3m and 5m deep. Access to the interior is generally provided by one or two entrances which often take the form of long passages formed by inturned ramparts and originally closed by a gate located towards the inner end of the passageway. The entrance may be flanked by guardrooms and/or accompanied by outworks. Internal features included timber or stone round houses; large storage pits and hearths; scattered postholes, stakeholes and gullies; and square or rectangular buildings supported by four to six posts, often represented by postholes, and interpreted as raised granaries. Large univallate hillforts are rare with between 50 and 100 examples recorded nationally. Most are located within southern England where they occur on the chalklands of Wessex, Sussex and Kent. The western edge of the distribution is marked by scattered examples in north Somerset and east Devon, while further examples occur in central and western England and outliers further north. Within this distribution considerable regional variation is apparent, both in their size, rampart structure and the presence or absence of individual components. In view of the rarity of large univallate hillforts and their importance in understanding the organisation and regional structure of Iron Age society, all examples with surviving archaeological remains are believed to be of national importance.

Despite some damage to the earthworks by modern activity, the Iron Age univallate hillfort and bivallate hillfort, called Bury Hill, survives well and is a good example of its type. The location of a univallate work and its later succession by a bivallate work on the same site is of particular interest and will enhance our understanding of each class of monument. Partial excavation has shown that the earthworks are well preserved and that the site will hold potential for further investigation, particularly of the settlement remains within the interior of the hillfort. Around 1km to the north-east is the roughly contemporary Balkesbury hillfort and the close association of these monuments will provide evidence for settlement in this region during the Late Bronze Age, Iron Age and Roman periods, and information about the landscape in which they were constructed.