Downing Point, battery and camp 100m south of 22 The Inches

A Scheduled Monument in Inverkeithing and Dalgety Bay, Fife 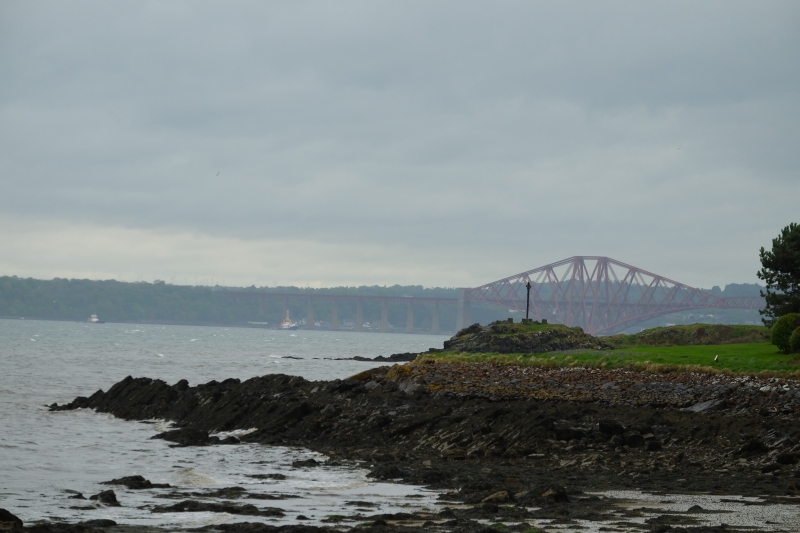 The monument is a coastal artillery battery and associated accommodation camp, established in 1914. It is visible as the remains of a series of concrete structures and hut bases, located within Bathing House Wood and on Downing Point near Donibristle Bay in Fife, about 18m above sea level, overlooking the navigation channels of the Firth of Forth.

The Downing Point battery formed part of the inner of three defensive lines of coastal batteries defending the eastern approaches into the Firth of Forth during the First World War. It comprises the mountings and holdfasts for two 12 pounder (Pdr) quick firing (QF) gun emplacements, with a gun range finder post in between. Immediately to the north of the battery are exposed concrete bases of a magazine, generator house, and ablutions blocks. There is high potential for the survival of the buried remains of the footings of infantry and officers' quarters for the camp, and associated block houses. At the tip of Downing Point are the concrete bases for two searchlights.

The scheduled area is irregular on plan, to include the remains described above and an area around them within which evidence relating to the monument's construction and use is expected to survive, as shown in red on the accompanying map. The scheduling specifically excludes all boundary walls, the water treatment tank and pipework along the northern boundary, and the top 300mm of footpaths within the scheduled area.

The coast artillery battery at Downing Point is notable for the comprehensive survival of the major elements of a coastal battery adjacent to the remains of associated accommodation.

Construction of the battery began in 1914 and it became operational by 1915. A War Office map from this date (The National Archives, WO 78/5165 and WO 78/4396) shows the layout of the battery, with the guns occupying a compact, elevated site to the southwest. To the north, and on lower ground, were the camp accommodation, blockhouses, engine room, magazine and ammunition store. The perimeter was surrounded by a plain and tangled barbed wire fence.  Downing Point, a narrow promontory of rock runs eastward from the battery, upon which were built two Defence Electric Lights, powerful search lights for identifying targets at night.

Many of the key elements of a coast battery survive with upstanding elements, including gun mountings and a range finder, but also associated features such as the searchlight platforms, helping us to appreciate how First World War coastal batteries functioned, and the role they played in defending the navigation channels at the eastern approaches to the key naval base at Rosyth. There is high potential for the survival of archaeological evidence both within and around the battery, particularly around the accommodation camp and the main battery structures. This can increase our understanding of the construction and use of the battery and the daily lives of the men who built and served on it.

This battery occupies an elevated position on the north Fife coast, overlooking the Firth of Forth to the south and the entrance of the estuary to the naval base at Rosyth. The monument forms part of three strategic lines of defence of the Firth of Forth and the Rosyth Naval Base, a vital component of a national defensive system of the UK that extended from Shetland to Cornwall during the First World War.

The three lines of defence were established to the east of the Forth Bridge: the Outer, Middle, and Inner. As the war progressed, changes in use of the river saw anchoring of vessels in waters east of the Forth Bridge. The defences of the Forth were re-worked in June and July 1917, and the guns were moved from the Inner line to the Middle and Outer line to strengthen the defence system to the east. The two 4.7-inch guns originally in place at Downing Point were sent to Inchcolm, while two 12-pdr QF guns were moved from Inchcolm to Downing Point. The inner lines of defence were largely abandoned by the start of the Second World War.

The inner defensive line of Forth batteries also included batteries at Hound Point, and further west at Inverkeithing (Carlingnose Battery, see LB52012), Dalmeny, and the island of Inchgarvie. Many of these are designated as scheduled monuments on account of their national importance. The batteries at Inchgarvie, Inverkeithing and Hound Point are visible from Downing Point, and the range of different guns used across these batteries would have provided comprehensive defences against amphibious attack. Each line of defence had an associated submarine barrier.

There were over 47 coast batteries within Scotland during the First World War. Barclay (2013, 22) identified 13-c.23 individual batteries in the First World War defences of the Forth, depending on how individual guns on Inchcolm and Inchkeith are counted. Many of the batteries were not re-used in the Second World War. The increased speed and range of ships and their guns meant that the Middle and Outer lines to the east were prioritised for defence ahead of the Inner line. As a result, the Inner gun batteries tend to have undergone less change than those found elsewhere in the Forth. It is rare to find elements such as metal fittings in situ, as reusable materials were often removed when the battery was decommissioned. Although clearance was conducted on many military sites following the end of the war, the somewhat remote nature of the battery at Downing Point meant that these efforts were not as intensive as elsewhere.

The physical remains of sites from the First World War such as Downing Point battery have become places to visit, remember and commemorate the men who served on wartime sites such as this. Their relatives and descendants visit Scotland from across the globe for this reason. They provide evidence of one of the largest construction efforts ever to have taken place in British history, which also had a significant impact on the local population and landscape. The monument is a highly visible reminder of the considerable efforts made to defend the British Isles during the First World War.

The monument is of national importance because it is an integral part of the network of defences constructed in the First World War to defend the coast of Fife and key strategic naval interests in the Forth. This is a well-preserved example of a First World War coastal battery, showing a wide range of remains of this site type.  The layout of the battery is well documented in War Office plans and the monument retains considerable potential to study the relationship between the various elements of the site, to add to our understanding of the coastal defences of the Forth in the context of the defence of eastern Scotland during the First World War. These monumental concrete structures are a tangible and powerful reminder of one of the defining events of the 20th century. If this monument was to be lost or damaged, it would significantly affect our ability to understand the nature and scale of the efforts made to defend Britain against enemy naval threats in the First World War.

Barclay, G.J. (2013) The Built Heritage of the First World War in Scotland. Project report, Historic Scotland and Royal Commission on the Ancient and Historical Monuments of Scotland.