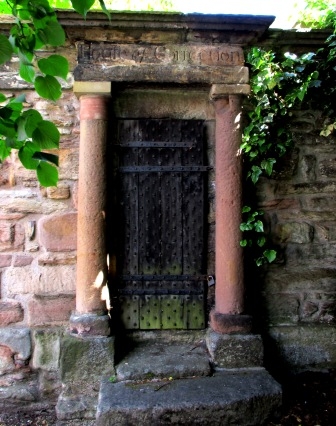 The monument consists of a lock-up, a prison used for temporary detention. The typical village lock-up was a one-storeyed, one-celled building, sometimes of round or polygonal plan. The 'Lock-Up' in Hawarden consists of a square of dressed sandstone 3.45m square, with two storeys and a basement entrance. It dates to the 18th century. Consolidation and restoration work was carried out in the 1990's. The sandstone exterior of the building was cleared of oxides and mould to reveal pale yellow, golden and light red sandstone in the construction. The lintels surrounding the former window opening is blocked by 2 pieces of well consolidated masonry. The north side of the Lock Up has also been cleaned. The timber doorway in the south face of the building has been restored, the door is covered by iron studs and supported by 2 hinges and 2 horizontal bars. The 3 stone steps leading up to the doorway have been consolidated. The broken column and damaged capital on the left of the doorway have been restored with a new piece of sandstone incorporated into the column. The 2 capitals support a stone entablature and a cornice top. The entablature is incised 'House of Correction'

The monument is of national importance for its potential to enhance our knowledge of judicial systems. It retains significant archaeological potential, with a strong probability of the presence of associated archaeological features and deposits. The structure itself may be expected to contain archaeological information concerning chronology and building techniques.