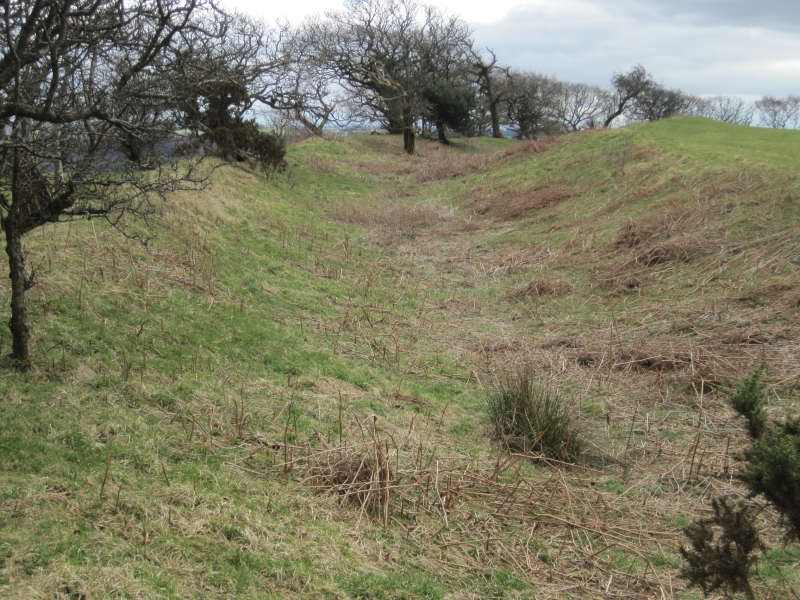 The monument comprises the remains of a hillfort which probably dates to the Iron Age period (c. 800 BC - AD 74). The site is situated on the top of a small hill east of Llantrisant. It consists of a series of banks and ditches enclosing a more or less circular area. The interior is featureless apart from a small pond near the southern edge. Along the southern edge there are no banks and ditches - the ground falls away steeply here. There is an inner bank, with an interior height of c. 1.5m, running right round the other sides of the enclosure, except for a break at the south-east corner, where there is an in-curving entrance 5m wide and 20m long. At the west end there is another bank outside the inner one, separated from it by a ditch 3m wide and 2-2.5m deep. This bank is 10m wide, with an external height of 3-3.5m at its heighest (the middle section), elsewhere 2-2.5m. This bank peters out on the south side, as does the ditch, where the slope steepens. On its south-west corner it is crossed by a ruined stone wall. Outside this bank are two further sections of bank: to the west is a small outlying bank 6m long, 3m wide and 0.75m high; opposite the south-west corner is another c. 20m long, 5m wide and 1.5m high.

Half way along the east end the outer bank starts again, and continues round the north-east corner until it stops abruptly at a fence line on the north side. This bank is similar to the outer bank at the west end: steep sided, 10m wide, 3m high, separated from the inner bank by a ditch 4m wide. At the north-east corner there is a further small bank outside it, 3m from it, 7m wide and 1m high, which also ends abruptly at the fence. Only the inner bank continues along the middle section of the north side.