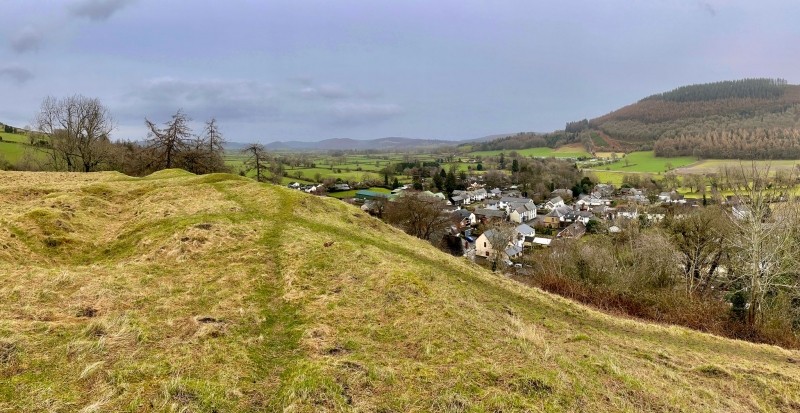 The monument comprises the remains of a motte and bailey castle, a military stronghold built during the medieval period. A motte and bailey castle comprises a large conical or pyramidal mound of soil or stone (the motte) surrounded by, or adjacent to, one or more embanked enclosures (the bailey). Both may be surrounded by wet or dry ditches and could be further strengthened with palisades, revetments, and/or a tower on top of the motte. The motte at New Radnor overlooks the walled town to its south-east and is an oval embanked enclosure measuring c.50m north-east to south-west by c.30m, formed from a truncated and scarped natural hillock, with traces of building positions visible within it. On the north and west it is divided by massive double ditches up to c.10.8m deep from a rectangular bailey measuring c.154m by c.60m; two causeways across the ditches allow access between the two. Further traces of structures are visible within the bailey area, which is itself defended by a substantial bank and ditch along its north-west side; the bank stands c.1.0m above the interior and c.1.5m to c.2m above the ditch bottom. The walls of the adjacent town adjoin the defences of the castle, though the presumed entrance arrangements on the west have been destroyed by a later quarry. The history of the castle is obscured by confusion between New Radnor and Old Radnor; this site is thought to date from the mid 13th century, but which of the recorded ‘rebuildings’ during that period it represents is not clear. It was captured by Owain Glyndwr in 1401 and allowed to decay thereafter.