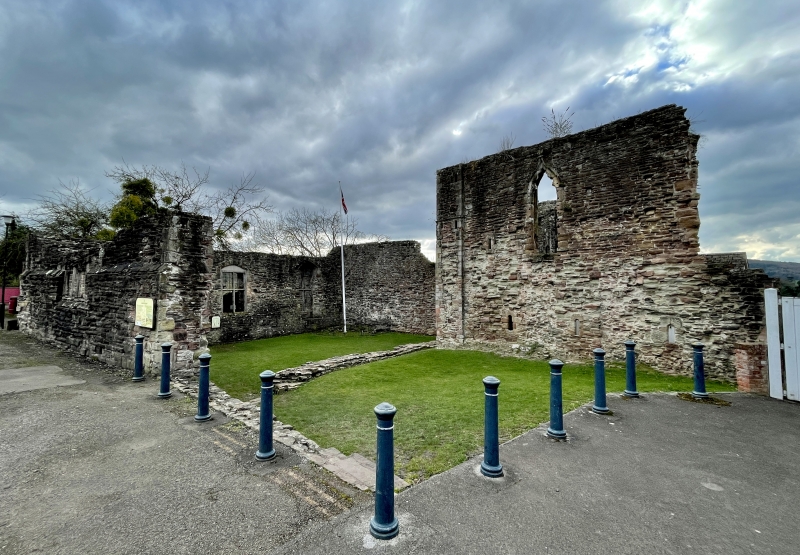 The monument consists of the remains of a castle, dating to the medieval period. Monmouth Castle was built between 1067 and 1071 by William Fitz Osbern, close consellor of William the Conqueror, as part of the Norman campaign to control Wales and the Marches. The earliest castle would have been of earth and timber construction, later fortified in stone. The only surviving elements of the medieval castle are the ruins of the Great Tower and Hall.

The Great Tower, built sometime before 1150, was a fine early Norman rectangular two-storeyed building, similar to the Great Tower at Chepstow castle. It would have comprised a hall and appartments on the first floor and a cellar below. The castle was held uneventfully by the Norman lods as the headquarters of an independent lordship until 1267 when it was granted, along with the Three Castles (White, Grosmont and Skenfrith) to Edmund Crouchback, son of Henry III, when he became Duke of Lancaster. Edmund built a large single storey rectangular structure to the south of the Great Tower, known as the Hall, which was used for holding courts up until the 17th century. In addition to these two rectangular structures the castle originally had a large circular keep, a gatehouse and a curtain wall, all of which were destroyed during the Civil War. The keep is famous as the probable birthplace of the future Henry V on 16th September 1387.

During the Civil War, the castle changed hands three times and was eventually destroyed by the Parliamentarians. A local man's diary for 30th March 1647 records that townsmen and soldiers began pulling down the round tower, and that on the 22nd December of that year it finally fell down 'upon one side, whilst we were all at sermon'. The site of the round tower is now occupied by Great Castle House.