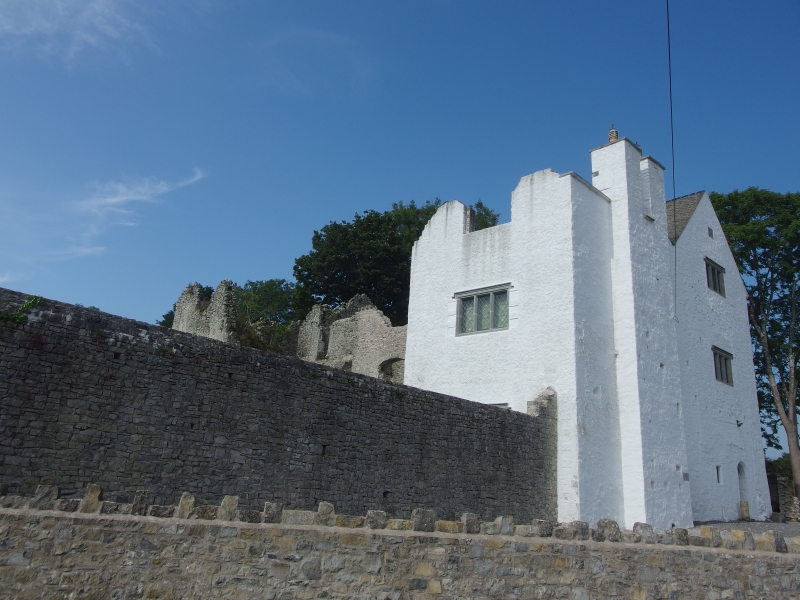 The monument, also known as Old Place or Old Plas, comprises the remains of an Elizabethan (1558-1903 AD) three-storey E-plan house with a courtyard and walled forecourt to the SE. It stands on the western edge of Llantwit Major at the south end of a grass field. John Leland mentions the house during the 1530s, and it is likely that the building had its origins as a late fifteenth – early sixteenth century hall house, and was subject to a number of rebuilding phases prior to achieving its current plan form and appearance. It measures 28.5m in length (NE-SW) by 23.5m transversely, and comprises a SE-facing main NE-SW aligned range with projecting kitchen and parlour end wings (SW and NE respectively). It is built from uncoursed limestone, with lime plaster internally and coarse stucco render externally, contrasting with smooth stucco quoins. It is largely ruinous, surviving without roofs, floors, windows or doors. The principal elevation of the main range is of three bays, with the original entrance at ground level in the left hand bay. The ground floor has two windows, the first floor has three windows, and the remains of the second floor retains evidence for three smaller windows surmounted by an incomplete corbel table. Both wings comprise one bay with a single window on each of the ground, first and second floors. The NW-facing elevation has a projecting stairwell and service wing. Stone mullions survive in a blocked upper window on the SW side. The early parlour and the solar above represent the earliest phase of construction, possibly dating from either the late fifteenth or early sixteenth century. This phase is likely to have had an open or floored hall extending from its western elevation in a similar position to the hall that occupies the site today. The second period of the early-mid sixteenth century saw the rebuilding of part or all of the hall’s front and rear walls to their current dimensions. The height of the hall was raised to the top of the first floor level enabling a floor to be inserted or raised over the hall to create a Great Chamber above. A service wing was added to the rear of the hall during the mid-sixteenth century. The fourth phase of additions was undertaken by Edmund Vann, c.1598, which transformed the house into what we see today, including the addition of the three storey kitchen and parlour wings, rear stairwell and second floor long gallery. In the final phase, a pair of ancillary buildings were built out from each wing. Jambs are recorded as being removed for reuse at Ham House in 1729, and the former house acted as a source of building stone during the eighteenth and nineteenth centuries. The parlour wing was re-roofed, re-floored and re-windowed to first floor level during 2012-2021, and is now occupied as a domestic dwelling.

The monument is of national importance for its potential to enhance our knowledge of medieval secular architecture and society. The monument is a well-preserved and fine example of its type illustrating the development of greater houses from earlier open halls to the E-plan mansions of Elizabethan/Jacobean Wales. Its piecemeal construction demonstrates the increasing fortunes of the owners and their determination to keep up with the latest architectural fashions. It retains important group value and shares architectural similarities with other lesser gentry houses such as Great House (Laleston), Old Beaupre, Sker House and Llanbradach-fawr. The structure and grounds may be expected to contain archaeological information in regard to chronology, architectural details, building techniques, functional detail and artefacts.