A Scheduled Monument in Llanuwchllyn, Gwynedd 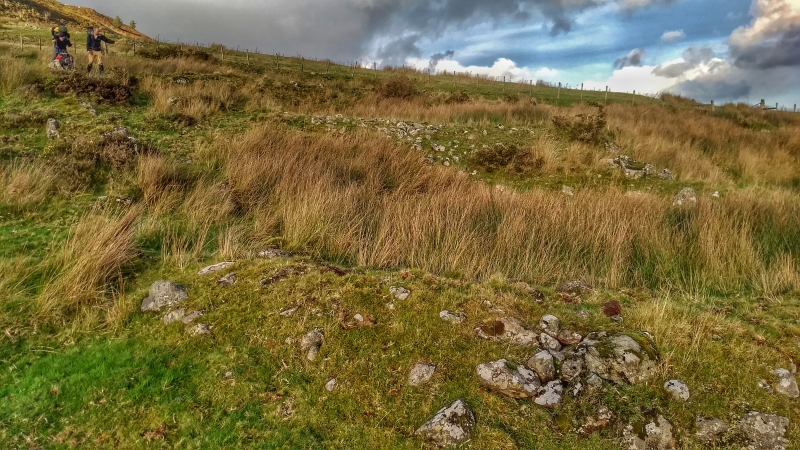 The monument comprises the remains of a group of round huts with associated enclosures, probably dating to the Bronze Age or Iron Age (c.2300 BC - AD 74), overlain by rectangular huts and additional enclosures of a later settlement, probably dating to the medieval (c. 1066-1540 AD) or post-medieval period (c. 1540-1899 AD). The monument is situated on the south-facing slope of Moel Caws.

To the NE is a quadrilateral enclosure, levelled into the hillside. The N side is a negative terrace 2 m high; the material dug out from this end could have been moved downhill to create the positive terrace, 1 m high, on the S. In the SW corner is a curving bank 1 - 1.5 m high, probably part of a disturbed round hut 9 m in diameter. W of this are the disturbed remains of a sheepfold.

A track now passes along the S side of the enclosure, separating it from another enclosure which lies at a lower level. The wall of this enclosure is 0.5 - 0.6 m high and 1.6 m wide. There is an entrance in the S side 2 m wide. There is a round hut in the SE corner 7 m in diameter with an entrance facing W; stone debris may indicate the site of another hut adjoining the SW side of it.

The W side of the settlement contains two round huts. That to the N is 10 m in diameter terraced into the slope, and the later track now passes along the N side of it. That to the S is at a lower level, 9.5 m in diameter, and also terraced into the hillside. A wall runs N from the W side of this hut. S of these two huts is a probable rectangular hut 8 m by 5 m, terraced into the hill slope. W of this is a terrace 1 m high, which may form the boundary of the enclosure originally associated with the round huts. Another terrace, over 1 m high, lies to the S, and more, smaller, terraces to the N.

The site is crossed by two tracks, one above, to the NE, and the other cutting across the settlement on the S side. The tracks would appear to be later than the settlement.

The monument is of national importance for its potential to enhance our knowledge of prehistoric and later settlement practices. It is an important relic of the prehistoric landscape, also showing continuity of use or re-use of the site, and retains significant archaeological potential. There is a strong probability of the presence of environmental and structural evidence, including preserved internal and external floor levels.