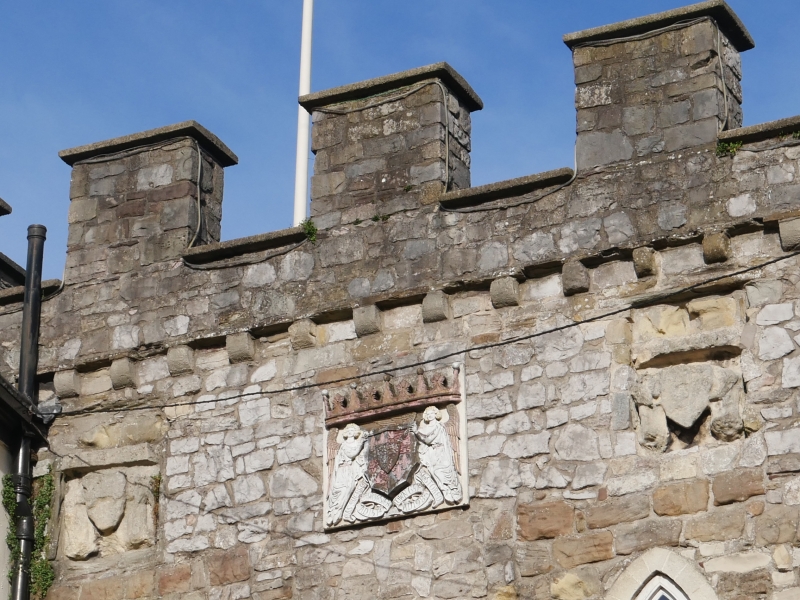 The monument comprises the remains of the medieval town wall and gatehouse, traditionally known as the 'Port Wall'. It was built between 1272 and 1278 by Roger Bigod III, Earl of Norfolk, alongside his remodelling of the castle. It enclosed an area much larger than was occupied (around 55 hectares), the medieval borough corresponding to the modern the town centre; the rest of the area enclosed was given over to orchards and meadows. Originally the wall was continuous, 1.1km long and 3m to 4m high and flanked by ten regularly spaced, open-backed D-shaped towers, of which seven survive. These are of a heightened single storey with a parapet above and in spite of their size contained no arrow loops or other openings. The whole is built of roughly coursed limestone rubble, with few dressings other than some Triassic (Sudbrook) Sandstone in the gate. The Port Wall provided the south-western, landward defence of the town while a great loop of the River Wye protected the north and the east. At its north-western limit the wall terminates in a small rectangular tower based on steep slopes above Castle Dingle and overlooking the Barbican and Upper Bailey of the castle. Here, its stands 5m high and runs south-eastwards in a 2m wide section which includes two round towers followed by a long, continuous stretch 4m wide and 4.5m high, long stretches of its ruined parapet, most of its wall-walk surviving. Still spanning the uphill end of High Street is the Town Gate. This was a simple rectangular tower of two stories, its passageway being defended by heavy doors and a portcullis at its outer end, the grooves for which have been removed at ground level by post-medieval alterations. It was altered in the 15th century and then converted in to a prison in 1524 by the Earl of Worcester and although essentially a medieval structure it was extensively remodelled in the 19th century when the first-floor windows, battlements and gate arches were replaced. The wall and another flanking tower survives to almost its full for another 100m to the south-east, where a broad breach has been made for the modern A48. Beyond that an impressive and near-intact-to parapet section continues uninterrupted through modern housing to end on the edge of a quarry cliff above the Wye floodplain; the final 200m and three towers running to the river were destroyed by the railway and Naval Dockyard. The area west of the A48 was largely undeveloped in the medieval period. There are no signs of an external ditch, although sections of the walls can be seen sounded directly onto limestone bedrock.

The monument is of national importance for its potential to enhance our knowledge of medieval defensive architecture and urban development. It functioned both as a defensive structure and a means of controlling movement and trade, the impressive line of plain flanking towers forming an impressive statement of Lordship and civic identity, perhaps deliberately evoking the walls of nearby Roman Caerwent. In spite of partial destruction and alterations to its gate it is one of the best preserved town walls in Wales and the Marches and the structures may be expected to contain archaeological information in regard to chronology, building techniques and functional detail. It forms an important element of the wider medieval landscape that has shaped the development of the modern town, within which it still forms a prominent landmark. The walls share group value with Roger Bigod III's late 13th century alterations to Chepstow Castle (MM003), his heavily fortified hunting lodge at Cas Troggy near Wentwood (MM015) and the great rebuilding of the church at Tintern Abbey (MM102)as a documented group of building works associated with a leading medieval magnate.