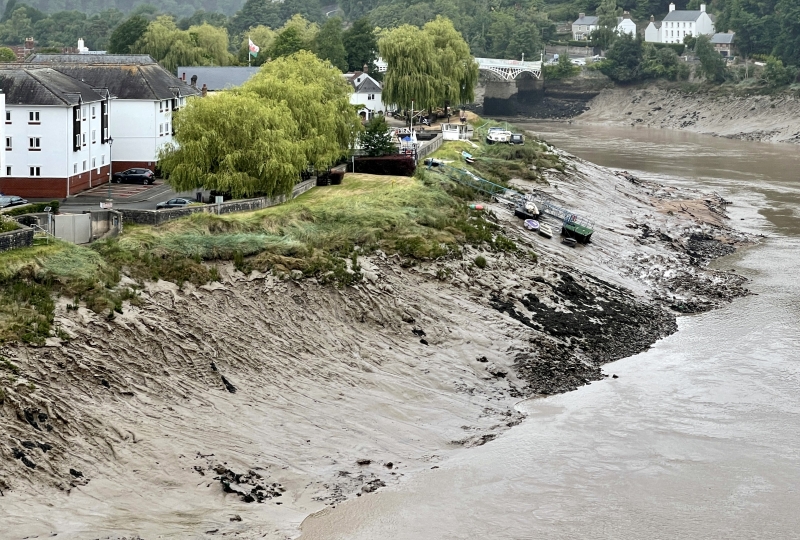 Chepstow Town Slip is the oldest of the two surviving slips that once served the commercial needs of the town and is an important surviving feature of the town's historic waterfront and quayside. It is an excellently preserved example of a post-medieval slip and comprises a cambered cobbled slipway some 25m long by 2.6m wide, sloping at an angle of 10 degrees and dropping from a height of 7.66m OD to 4.0m OD within 20m. The final 5.0m of the slipway forms a flight of shallow steps down to the low-tide mark in the River Wye. The structure is bounded to the south by a dwarf wall and to the north by a paved edge constructed of large recumbent stones some 0.5m in average length.

In advance of the construction of a new flood defence scheme by the Environment Agency, partial excavations were carried out on the site in September and October 2001. These demonstrated that the visible structure dates to the early to mid-19th century and overlies a post-medieval slipway constructed of square panels of cobbled paving revetted by a ladder-like framework of substantial oak timbers. It is probable that it is this structure which is depicted on a detailed map of 1686. The slipway still visible today is depicted in situ on maps dating to 1801, 1835 and 1899 and was previously known as the Lower" or "Duke of Beaufort's Slip".