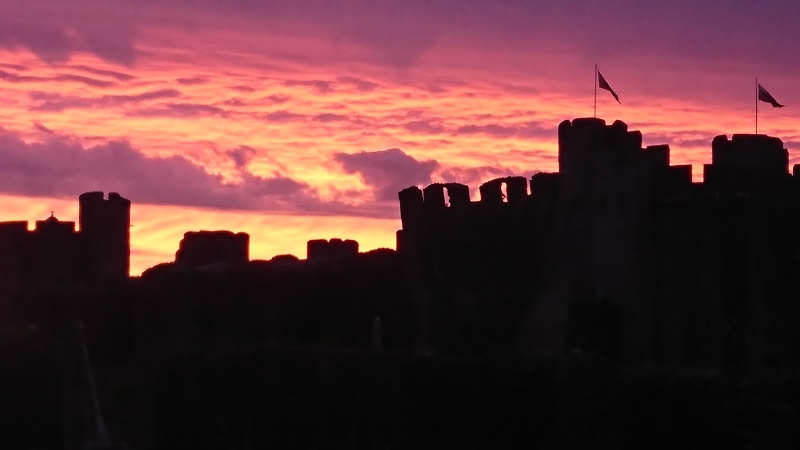 This monument comprises the remains of a medieval castle built by ‘Red Gilbert’ de Clare between 1268-1271. Caerphilly Castle is one of the great medieval castles of western Europe. Several factors give it this pre-eminence – its immense size (1.2ha), making it the second largest in Britain, its large-scale use of water for defence and the fact that it is the first truly concentric castle in Britain. At the time of its building, it was a revolutionary masterpiece of military planning.

One of Henry III’s most powerful and ambitious barons, Gilbert de Clare, lord of Glamorgan, built the castle. His purpose was to secure the area and prevent lowland south Wales from falling into the hands of the Welsh leader Llywelyn ap Gruffudd, who controlled most of mid and north Wales.

The outer skin or ward is formed by a low battlemented curtain wall with large semi-circular projections in the corners and gatehouses in the middle of the east and west sides. Only a narrow strip separates this from the much stronger inner ward which has high curtain walls, circular corner towers and two large strong gatehouses corresponding with the outer ones.

The south and north lakes around the castle formed an almost impregnable barrier to attackers. The dams themselves are a major achievement of medieval engineering. The South Dam is earlier than the north dam; its outer face was protected by a massive wall with a battery of projecting buttresses. The outer defences were completed by making a 1.2ha artificial island to the west of the castle, known as the hornwork. The outer gatehouse on the east side is both the present and original entrance. The outer ward is entered via a bridge leading to its east gatehouse with twin D-shaped towers, only the restored outer walls of which remain.

The inner ward is the most impressive part of the castle. The corner towers demonstrate varying degrees of preservation. The north-west tower is complete, little remains of the north-east tower and the south-east is partly ruined. It stands at 15m high and leans at an angle 10° from vertical, and the cause, whether subsidence or Civil War slighting, is unknown. The imposing east gatehouse of the inner ward consists of twin D-shaped towers, a central passage with portcullises at both ends and circular stair turrets on the inner corners. The apartment on the second floor was probably that of the constable of the castle.

On the south side of the inner ward are the great hall and state apartments. The large ground-floor hall was a sumptuous building. The two doors at the east end led to a buttery and cellar, possibly with a small chapel over them. To the west were the state apartments, well-appointed rooms with fireplaces and a large traceried window on the first floor.

To the north-west of the moat lies a 17th century Civil War earthwork gun platform. It is not known if the earthwork was raised by the royalists or if it was the work of parliamentarian forces after March 1646.

The castle’s active history was an extremely short one. By 1283 Edward I had removed the threat of Welsh independence and the need for Caerphilly had gone. Minor Welsh attacks in 1294-5 and 1316 and a siege in 1326-27 failed to make any impact and the castle feel into ruin.

This monument is of national importance for its potential to enhance our knowledge of medieval social, domestic and political life and warfare. The scheduled area comprises the remains described and an area around them within which related evidence may be expected to survive.