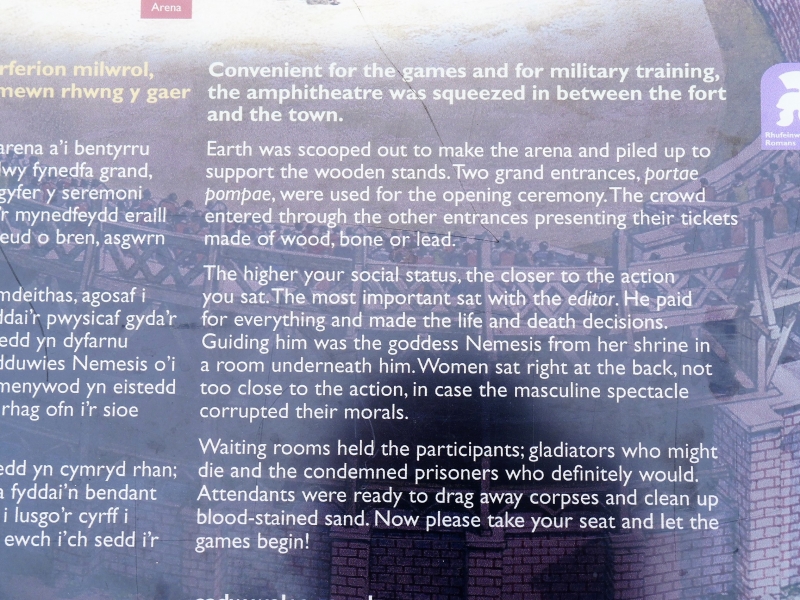 The monument consists of the remains of an amphitheatre, dating to the Roman period (1st - 4th century AD). The amphitheatre was built around AD90 outside the W wall of the fortress, in an area already occupied by civilian settlement and an extra-mural bath building. The structure was excavated in 1926/27 by Mortimer Wheeler, then director of the National Museum of Wales, and was subsequently gifted to the nation.

The amphitheatre is oval in plan, 90m long by 70m wide, and is orientated roughly NW/SE. The external walls of the amphitheatre are stone-built, with large stone buttresses. The internal walls, defining the edge of the arena, are also stone built and would originally have been covered with white plaster onto which red lines were painted to represent dressed ashlar – remains of this plaster were found during the excavation of the site. The walls would have been no higher than they are today, and would have supported a timber grandstand on which up to 6000 spectators would have sat during games and events at the amphitheatre. The space between the inner and outer walls would have been filled with banked earth that would have provided additional support for the timber seating.

There were two main entrances, or portae pompae, that led into the area, one at the N end and one at the S end. These would have consisted of stone-built barrel-vaulted arches covering paved entrances, and would have been used by processions of performers at the start of events in the arena. There are six smaller entrances that would have been used by spectators to access the seating and by performers to enter the arena, three on the W side of the amphitheatre and three on the E. The centrally positioned spectator’s entrances, one on each side, led to private boxes where officials would have watched the games. Below these boxes were rooms where gladiators, prisoners or wild animals would have been kept before being released into the arena.

A system of drains runs through and around the amphitheatre, which linked to an external drain that flows into the river Usk. In the N entrance the remains of the drain are visible below the paving. This ran across the centre of the arena and out of the S entrance. Another drain runs around the base of the inner wall of the amphitheatre, draining the arena, and links into the drain running through the middle of the arena. These drains still successfully drain the site during wet weather.

The amphitheatre was repaired and altered throughout its period of use, with new buttresses built to support the outer wall, spectator entrances blocked and a shrine of Nemesis built into the room below the private box on the E side.

The monument is of national importance for its potential to enhance our knowledge of Roman military and urban organisation. It retains significant archaeological potential, with a strong probability of the presence of associated archaeological features and deposits. The structure itself may be expected to contain archaeological information concerning chronology and building techniques, together with a strong probability of environmental evidence. Amphitheatres may be part of a larger cluster of monuments and their importance can further enhanced by their group value.