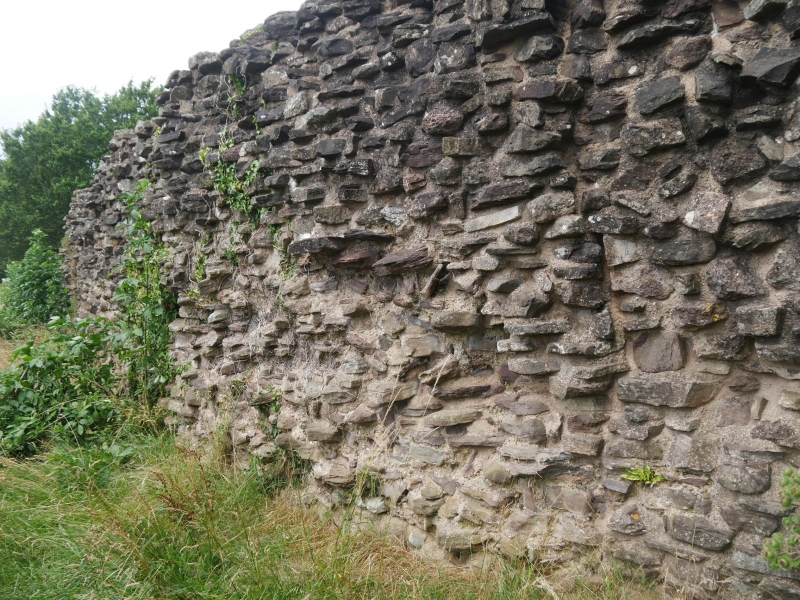 The monument comprises buried features and earthworks representing a Roman legionary fortress. The fortress at Caerleon, or Isca, is one of only three permanent legionary fortresses in Britain and was founded around AD75. Its construction was probably linked to the campaigns of the Governor of Britannia, Julius Frontinus, against the Silures. The fortress was home to the 2nd Augusta Legion, a legion of over 500 men. The site of the fortress was chosen for its position on gently rising ground adjacent to the river Usk at a point where it could be bridged but was also accessible to sea-going ships, and on the road between Wroxeter, Gloucester and Carmarthen. The fortress covered an area of 50 acres and conformed to the standard playing card design, had a gated entrance in the middle of each side and was divided into insulae, or blocks, by a network of roads. The fortress was in use by the 2nd Augusta Legion until around AD300 after which it continued to be partly occupied although there is no clear evidence to determine whether the occupation was military or civilian.

The earliest defences comprised a turf and clay bank surmounted by timber defences, timber towers forming gatehouses at each entrance, and single timber towers spaced at intervals around the fortress walls. A large V-shaped ditch, 8m wide and 2.5m deep, ran around the outside of the defences. Excavation of a section of the fortress defences in Prysg Field revealed that oak logs had been laid on the ground as a foundation for the bank. Over these foundations the bank was constructed using turves cut to regulation size, and clay dug from the external ditch. The bank had a vertical outer face and was 5.5m wide and up to 3m high. A road, the via sagularis, ran around the inside of the rampart and allowed soldiers rapid access to the defences in case of attack. At the beginning of the 2nd century AD the timber defences were rebuilt in stone. The outside face of the bank was fronted with a stone wall 1.5m thick, the gates were fortified by twin towered stone gatehouses and a series of stone turrets replaced the individual timber towers.

The internal layout of the fortress conformed to the standard legionary fortress plan, with the via principalis running E/W through the fort, the via praetoria running N/S to intersect with it, and a network of other roads linking the different areas of the fortress. The earliest buildings are likely to have been timber-built, later replaced in stone. In the centre of the fortress, under the modern Church, was the Principa or headquarters, behind which was the Legate’s residence. Either side of the Legate’s residence were a series of workshops, one of which, a large courtyard building, has been subject to geophysical survey. The results of the survey suggest that it was used for ironworking on an industrial scale. Barrack blocks were located both along the N side of the via principalis and inside the N defences. A section of the N barrack block complex was excavated in 1927/29 by Victor Nash Williams and is still exposed. The barrack blocks would have housed a legionary century (80 men), with 10 groups of eight men sharing two rooms. The smaller of the two rooms would have been used for storage and the larger room for sleeping. The centurion’s residence, which included housing for junior officers and also offices, is located at the N end of each barrack block. A latrine block is located to the N of the barrack blocks, immediately inside the defensive bank. A series of ovens and cookhouses are located on the inside of the W rampart, separated from the barracks by the line of the via sangularis.

On the S side of the via principalis were the fortress baths. These were subject to a series of excavations between 1964 and 1981. The baths were one of the first buildings to be constructed from stone, and date to AD75/77. They were an enormous complex, and included a large open air courtyard with a swimming pool and a huge range of buildings that contained the baths and an exercise hall. The outdoor swimming pool and a section of the cold baths, frigidarium, are on display in the fortress baths museum.

On either side of the baths complex, fronting the via principlais, were houses for Tribune’s, senior army officers. In the SW quadrant of the fortress the area behind the Tribune’s houses was occupied by three granaries and a large courtyard building that was used as a warehouse. Excavations carried out on the W range of the courtyard building revealed that it had been used for the storage of military equipment, with an exceptional collection of bronze and iron armour fragments found in one room. On the E side of the baths complex a possible hospital was identified through excavation, while further barrack blocks were located inside the S defences, either side of the via preatoria.

The scheduled areas comprises the remains described and areas around them within which related evidence may be expected to survive.