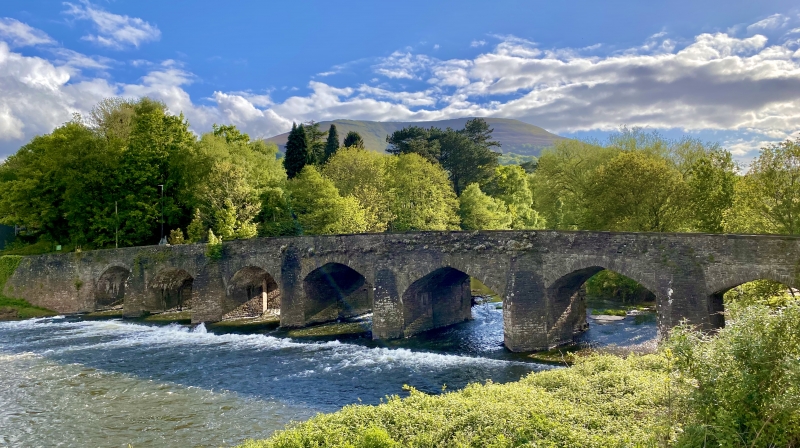 The monument consists of a bridge dating to the medieval period with substantial post-medieval alterations. The bridge comprises a 7-arch stone road bridge with mostly segmental, voussoired, arches. On the downstream side the central and northern arches are more acutely pointed and the southernmost arch has been rebuilt with an arch ring and keystone. It has pointed cutwaters and a ramped deck. At the Abergavenny end are two low flood arches with a stepped abutment between. The bridge has been widened on the upstream side and has more regularly shaped segmental arches with the cutwaters between, stepped up beneath the rebuilt parapet. Also on the upstream side are corbelled brackets, probably to support the former parapet. The bridge is known locally as Tudor Bridge as it was recorded as having been built by Jasper Tudor, Duke of Bedford and Baron of Abergavenny in the 15th century. Although the origins of the bridge are likely to be medieval, it is stylistically 17th century but with substantial later alterations.

The monument is of national importance for its potential to enhance our knowledge of medieval and post-medieval construction techniques and transportation systems. It retains significant archaeological potential, with a strong probability of the presence of associated archaeological features and deposits. The structure itself may be expected to contain archaeological information concerning chronology and building techniques.