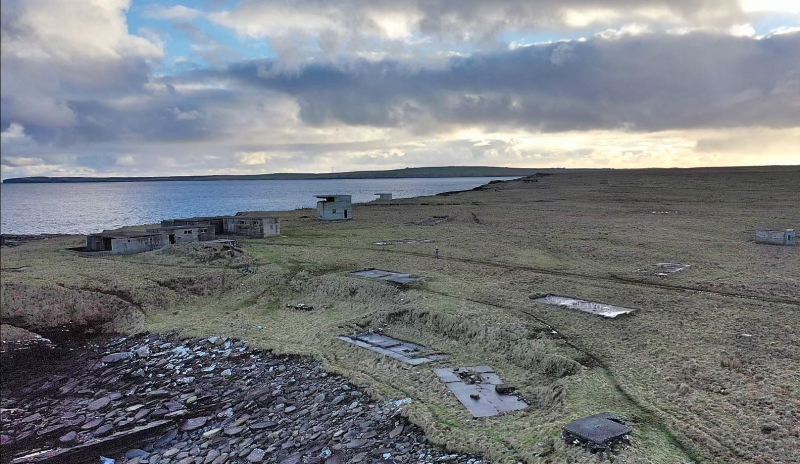 The monument is the remains of a coastal artillery battery and associated accommodation camp, established in 1940 and used during the Second World War. It is visible as the remains of a series of concrete and brick structures, earthworks and hut bases. It forms part of a network of coastal batteries built to defend the key strategic harbour of Kirkwall. This battery was one of three covering the approaches to Kirkwall, which lies some 9km to the W. It is located on the coast at Rerwick Head between 1m to 15m above sea level, overlooking the entrances to the shipping channels of Shapinsay Sound to the N and Deer Sound to the SE.

The main battery comprises two 6-inch gun emplacements, with a single earlier 4.7-inch gun emplacement, along with a battery observation post, two crew shelters, a magazine, two searchlight emplacements, an engine house, three air raid shelters, a signal station, a series of machine gun nests and a number of ancillary and support structures surviving either as standing buildings or as hut bases. The former accommodation camp is located around 225m SW of the battery. It survives as a series of at least eight hut bases in a variety of forms, together with elements of walling and interior structures.

The scheduled area is irregular on plan to include the remains described above and an area around them within which evidence relating to the monument's construction and use is expected to survive, as shown in red on the accompanying map. The scheduling specifically excludes the above-ground elements of all the post-and-wire fences in the area.

This monument is of national importance because it has an inherent potential to make a significant addition to our understanding of the past, specifically, the network of defences constructed in the Second World War to defend the key strategic harbour of Kirkwall. This is a well-preserved example of a coastal battery, showing a wide range of remains of this site type. Its significance is enhanced by the rare survival of features such as the wooden fittings and internal decoration. The monument offers considerable potential to study the relationship between the various elements of the site, and to enhance our understanding both of the Kirkwall defences and the wider defences in place around Orkney and beyond. These monumental concrete structures are a tangible and powerful reminder of one of the defining events of the 20th century. If this monument was to be lost or damaged, it would significantly affect our ability to understand the nature and scale of the efforts made to defend Britain against enemy naval threats in the Second World War and diminish the association between Orcadians today and those who lived and served in Orkney during the war.

RCAHMS records the monument as HY51SW 10.