A Scheduled Monument in Broxburn, Uphall and Winchburgh, West Lothian 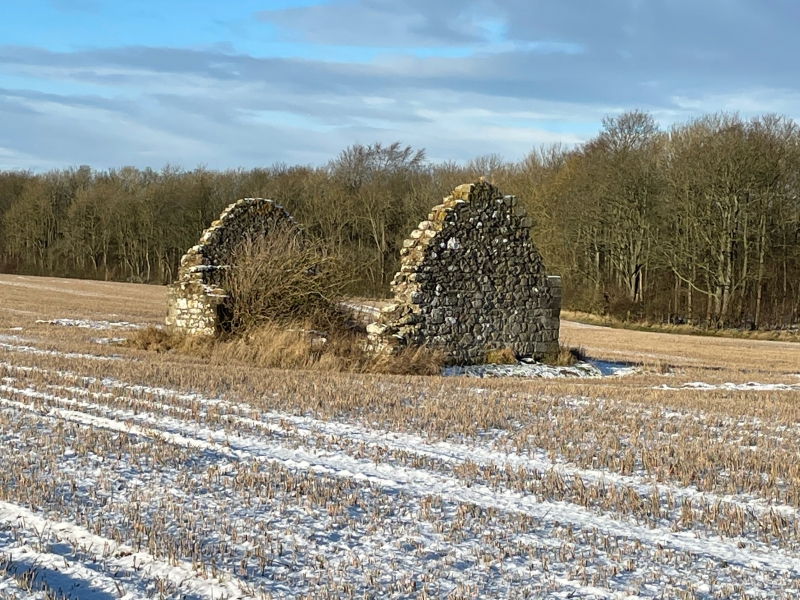 The monument consists of the roofless ruin of a pre-Reformation chapel. The building appears to have been constructed partly from the remains of an earlier building, as packing material within the walls may contain fragments of late 14th-century fabric.

The structure is oblong on plan, measuring 11m E-W by 6.1m N-S over walls 0.7m thick. The N and S walls, which are incomplete, are constructed of coursed random rubble with some freestone dressings. Both windowless gables are intact, reaching a height of about 5m. The E one retains three of its dressed skews. In the lower wall, towards the S side, is an aumbry, and above this are three image brackets.

The W gable is intaken at wallhead level (2.3m). Recent repointing with cement has occured and the walls have probably been consolidated in the past. There have been opposed entrances towards the W end. Only the S entrance is intact, retaining its chamfered jambs. The S wall contains two splayed windows with chamfered jambs grooved for glass. The N wall is much reduced and was apparently blind.

The area to be scheduled is rectangular, measuring a maximum of 40m E-W by 35m N-S, to include the church and a surrounding area where further features are likely to survive, as marked in red on the accompanying map.

The monument is of national importance as an example of a private chapel which prior to the 15th century had attained parochial status. Although the present building has been much altered it still provides physical evidence and has the potential to provide further evidence, through research and excavation, for ecclesiastical architecture, parish evolution and patronage, and material culture in pre-Reformation Scotland.

RCAHMS records the monument as NT07NE 6.