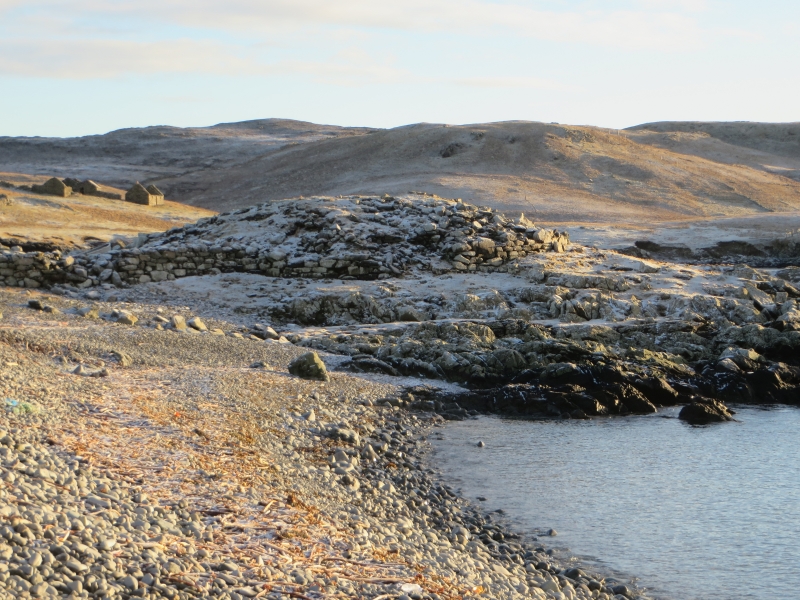 The monument comprises a broch of Iron Age date, built probably between 500 BC and AD 200. The broch is visible as a mound with protruding stonework, covering an area approximately 20m in diameter and standing more than 2m high. The broch occupies a small, low headland at the western side of West Mainland, just above the high water mark. It is surrounded by the sea on three sides, and overlooks the Voe of Footabrough and westwards to the North Atlantic. The monument was first scheduled in 1934 but the documentation does not meet modern standards: the present rescheduling rectifies this.

The area to be scheduled is circular on plan and measures 30m in diameter, centred on the centre of the monument. The area to be scheduled includes the remains described above and an area around them within which evidence relating to the monument's construction, use and abandonment may survive, as shown in red on the accompanying map. The scheduled area specifically excludes the above-ground remains of the later stone structures to the north of the broch, to allow for their maintenance.

The broch survives as a low stony mound with some of its structural masonry visible. Despite the partial intrusion of a later stone structure on the north, and some coastal erosion to the southeast, the broch survives in generally good condition. The coursed masonry of the outer wall is visible in places standing up to five courses high. The structural ground plan of the broch is largely intact and the remains of several architectural features are visible, including intra-mural cells and indications of an inward batter to the wall face. The interior is filled with rubble and largely grass-covered. There is high potential for the survival of occupation evidence in the form of artefacts and ecofacts beneath the modern surface. The land immediately surrounding the broch may also contain significant remains of associated outer buildings and evidence of land use. These can help to build a wider picture of the nature of the settlement here, its development sequence, and the social, economic and environmental circumstances surrounding the broch's construction, use and abandonment.

This broch is one of over 130 brochs known in Shetland. Brochs are a particularly distinctive type of Iron Age structure and are likely to have served a variety of functions. While a domestic and agricultural function has been inferred from the evidence of excavated brochs elsewhere, researchers have also considered the symbolic and strategic significance of these buildings, their outworks and their position in the surrounding landscape. This example takes advantage of seaward views across Footabrough Voe and westwards to Foula and the North Atlantic, and the promontory on which it sits has pebble beaches on either side giving easy access to the sea. Like the majority of examples in the Northern Isles, the broch seems to have been positioned to exploit landward and seaward resources equally, while acting as a visible waypoint or prestigious coastal mark. It has the ability to tell us much about broch architecture, the function and relative status of these structures, and the wider division and exploitation of natural resources.

The monument is labelled 'Brough' on the Ordnance Survey first edition, with a 'fishing station' marked immediately to the north. Stone from the broch has reportedly been used to build sheep shelters and dykes, including those immediately north of and abutting the broch.

This monument is of national importance because it has an inherent potential to make a significant addition to our understanding of the past, in particular the Iron Age occupation of Shetland and the role and function of brochs. The survival of structural and artefactual material from various phases of the broch's development can help us understand more about the lifestyles of the people occupying these distinctive towers and something of their pattern of activity. Its loss would significantly diminish our future ability to appreciate and understand this class of monument and the wider Iron Age landscape of Scotland.

RCAHMS, 1946, The Royal Commission on the Ancient and Historical Monuments of Scotland. Twelfth report with an inventory of the ancient monuments of Orkney and Shetland, 3v Edinburgh. 146.