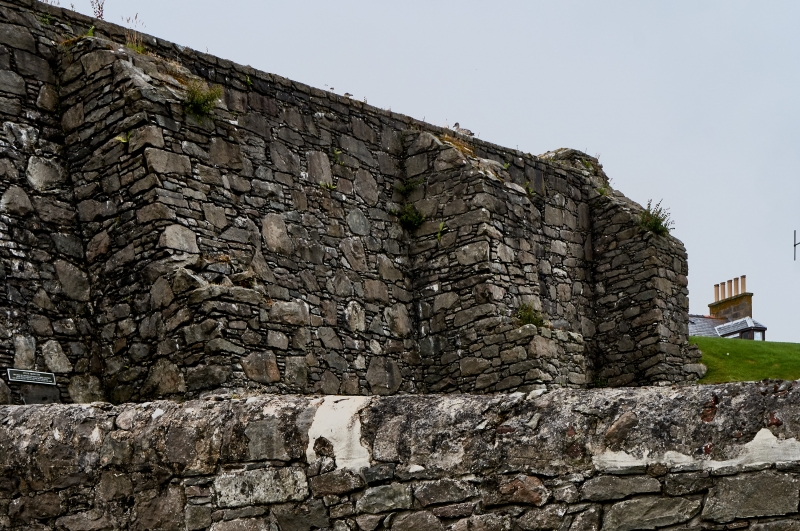 The monument consists of the 17th century artillery fortification known as Fort Charlotte. Although a fort seems to have been built at Lerwick to protect ships of the English Republican Navy, no trace survives. The present fort was begun during the Second Dutch War (1665-7). Its construction was placed in the hands of Robert Milne, Charles II's master mason, and cost £28,000. It was roughly pentagonal in shape, with a battery set behind a zig-zagged parapet wall facing out over Bressay Sound to the east, and angled bastions defending the landward sides. It contained a two-storey barrack block holding 100 men, with space for another 200 to be quartered near by. The battery was never fully armed, and the rampart had not been finished by the time peace was made in 1667. During the Third Dutch War (1672-77) the fort was not garrisoned, but in 1673 the Dutch landed and burnt the abandoned barrack block.The fort was eventually completed during the War of American Independence (1776-83), when Britain was opposed by the naval forces of Spain, France and the states of northern Europe. It was named after George III's queen, Charlotte, and in March 1781, it was garrisoned by 270 soldiers of the Earl of Sutherland's Regiment.

The ramparts follow the outline of the fort left incomplete in 1667, with a seaward battery for up to 12 guns and bastioned defences to landward. A plan drawn in 1783 shows four traverses running back from the battery walls, designed to prevent enemy fire raking the battery, but it is doubtful if these were ever built. Otherwise all the principal buildings on this plan still survive, some with later modifications (these are separately listed and do not form part of scheduled monument). The main gate lies between the west and southwest bastions, while secondary gates are set in the north and south walls. A small postern gate between the west and northwest bastions appears to be a 19th- or early 20th-century slapping.

The area proposed for scheduling encompasses the whole area contained within the walls of the fort, the walls themselves, and a zone extending for 2m in front of the base of the walls on all sides, excluding all buildings in use as is shown in red on the accompanying map.

The monument is of national importance as an almost completely preserved example of a late or 18th-century coastal battery and associated barrack, built in a period of tension to control one of the principal shipping lanes between the states bordering on to the Baltic and North Sea on the one hand and the European colonies in America and the Far East on the other. Its importance is enhanced by the fact that it partly encapsulates an earlier fort of 1665-7, and incorporates modifications made subsequently in the 19th and early 20th centuries.