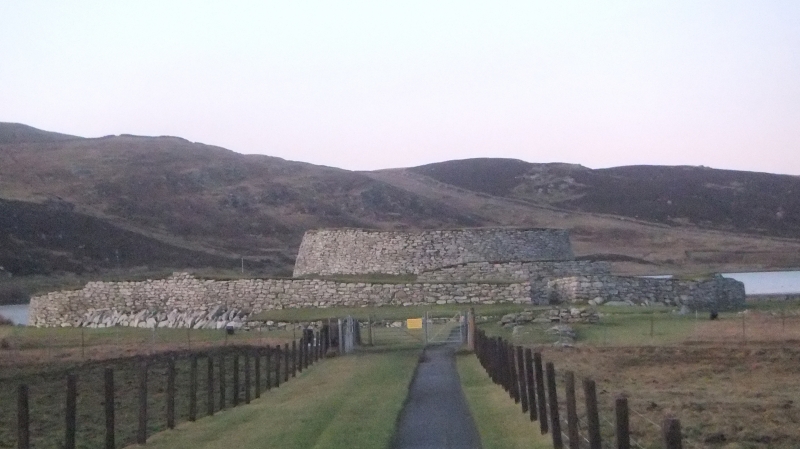 The main elements, in ascending date order, are a small house and outbuilding of late Bronze Age date, an early Iron Age ring-fort, a middle Iron Age blockhouse and broch (with later alterations), a later Iron Age wheelhouse-type dwelling and several lesser foundations representing late Iron Age dwellings. A causeway leads towards the site, which is situated on a small rock knoll beside a shallow loch.

The area to be scheduled is irregular on plan, bounded to the S by the fence marking the limit of the area in state care and on the remainder of the perimeter by a line running approximately 20m out from the edge of the peninsula on which the monument stands, so that a portion of the bed of the loch is included.

Within this area evidence relating to the construction and use of the various elements of the monument is likely to survive. The area to be scheduled is marked in red on the accompanying map.

The monument is of national importance as one of the most comprehensively excavated examples of a late prehistoric defensive settlement. Despite the extensive excavation and reconstruction, much remains unanswered, especially as regards the evolution of the physical setting and the fine details of construction sequence.