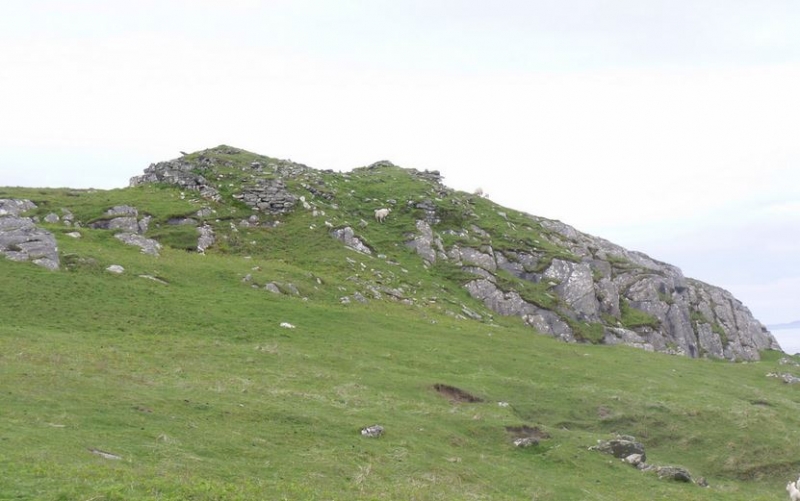 The monument comprises the well-preserved remains of Dun a'Gheird, a firtified building of Iron Age date, visible as an upstanding structure. The monument was first scheduled in 1964, but is being re-scheduled now to clarify the extent of the scheduled area.

The monument is situated on a low boss at about 40m OD and occupies the S end of a steep-sided rocky spur, about 1km SW of Kilvickeon Old Parish Church (alternative spelling Kilviceuen). The monument consists of the well-preserved remains of a galleried dun, a type of monument sometimes called a 'complex Atlantic roundhouse'. The dun is roughly sub-rectangular on plan and measures about 11m NNE-SSW by 9m transversely. It is defined by a stone wall, which varies in thickness from c.4.3m on the N side to c.2.4m on the S side. Much of the circuit of the outer face can still be traced; on the N it rises to 0.7m above the level of the debris outside. Only a few inner facing-stones can be seen. There are traces of an intramural gallery within the thickness of the wall at various points, which may originally have continued around the entire circuit. The gallery is best preserved on the S, where it stands 0.6m high, and several of the roof lintels are still in position.

There are two entrances, diametrically opposed, in the NE and SW. The W passage-wall of the NE entrance is particularly well-preserved, standing to a maximum height of 1.2m in ten neatly built courses. It has been checked for a door c.1.5m from the line of the outer face, and immediately within the checkthere is a bar-hole, 2.5m long and 0.2m by 0.15m in cross-section. The inner part of the passage exhibits a pronounced curve on plan. Of the opposite wall only the outer crner survives, indicating that at its mouth the passage measured about 1.4m in width. The SW entrance is 1.2m wide on the line of the inner face, but 0.5m from the outer end its width has been reduced by rebates, only one of which (that in the E passage) now survives. Immediately inside the surviving rebate there is a square bar-hole 0.3m long. The two lintels apparently still in position over the inner part of the passage lie little more than 0.5m above the present ground-level inside the dun, indicating that the interior is probably filled with a considerable amount of debris.

A massive boulder-faced, rubble-covered revetting wall, at least 1.8m thick, has been built against the dun wall on the N. In the centre of the spur its outer face stands 1.5m high in five courses, and on the W flank, where it abuts againstthe outer face of the dun, it attains a height of as much as 2.2m. The revetment appears to have been interrupted in line with the entrance of the dun.

The area proposed for scheduling comprises the remains described and an area around them within which related material is likely to survive. It is irregular in shape, with maximum dimensions of 77m NE-SW by 44m transversely, as marked in red on the accompanying map. It is bounded on the E by the base of the cliff, but on the W extends to include the breadth of the adjacent gully, which may have served as an access route to the dun from the shore.

The monument is of national importance because of its potential to contribute to an understanding of later prehistoric defended settlement and economy. Its importance is increased by its good state of preservation and, given the likely quantity of archaeological debris surviving within the dun, by its very high archaeological potential. The monument also has value as one of a number of monuments in this vicinity of potentially contemporary date.

RCAHMS records the monument as NM41NW 2.

MacCormick J 1923, THE ISLAND OF MULL [AN T-EILEAN MUILEACH]: ITS HISTORY, SCENES AND LEGENDS: AN INTERESTING GUIDE TO THE ISLAND, Glasgow, 159.

RCAHMS 1980, 'AN INVENTORY OF THE MONUMENTS VOLUME 3: MULL, TIREE, COLL AND NORTHERN ARGYLL (EXCLUDING THE EARLY MEDIEVAL AND LATER MONUMENTS OF IONA', Edinburgh, HMSO, 100-1, No. 185.