A Scheduled Monument in North, West and Central Sutherland, Highland 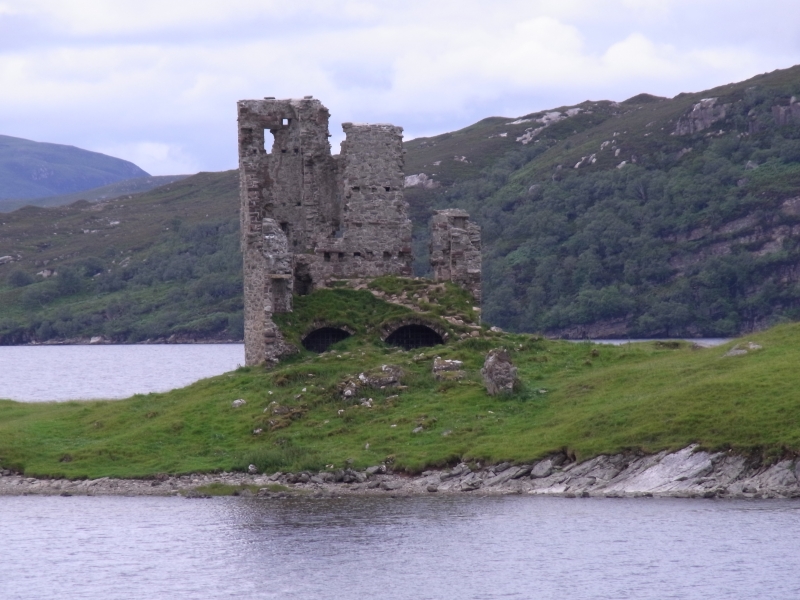 The monument consists of Ardvreck Castle, now in a ruinous state, and associated structures situated on a rocky peninsula in Loch Assynt. The castle remains are already scheduled, but not the surrounding structures. This proposal extends protection to the whole of the peninsula.

The castle was formerly the residence of the MacLeods of Assynt and is customarily dated to the end of the 16th century. The standing remains represent an oblong tower with a circular stairtower at its SE corner. The remains of a double vaulted basement are also visible. Earthworks on the S side of the standing remains may relate to the former layout and ground plan of the castle complex. The remains of a rampart and ditch can be traced running across the narrow neck of the peninsula on the W side of the stone field wall. To the SSW of the castle lie the remains of a rectangular building that contains a kiln at its southern end.

The area to be scheduled includes the whole of the peninsula, to include the structures described above and an area around them in which related remains are likely to survive. It has maximum dimensions of 220m NNW-SSE by 140m, as indicated in red on the accompanying map extract.

Ardveck is of national importance as an example of a late medieval clan castle. The peninsula on which it stands also contains evidence for at least one possible agricultural building related to the castle, and for associated field and defensive enclosures. The castle is a rare surviving example of this type of late medieval Highland castle.

The monument is recorded in the RCAHMS as NC 22 SW 2.