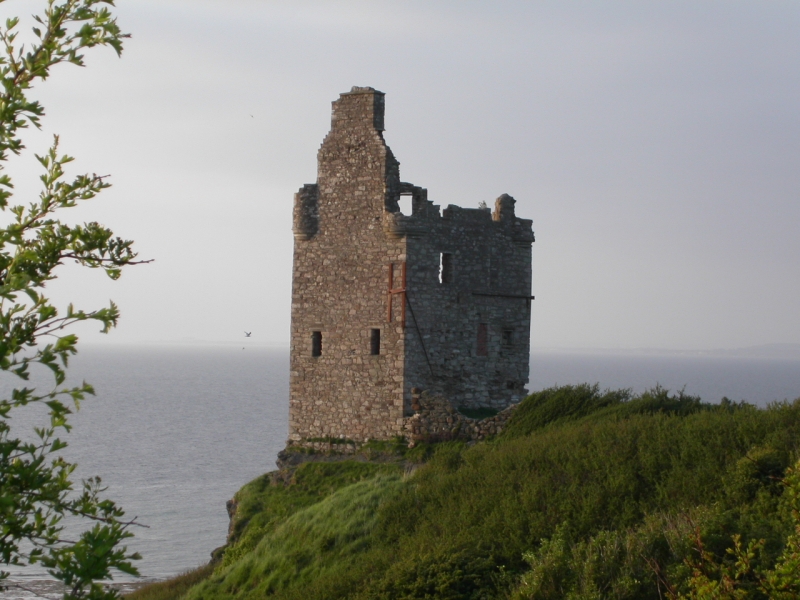 The castle consists of two ditches cutting off a promontory on which stands a simple oblong tower measuring 11m by 9m and rising to four storeys to end in roofless angle-turrets at three corners, the fourth having been occupied by the caphouse and stairhead at the NW angle. Part of the curtain walling remains of the S side of a courtyard to the E of the tower; this appears not to be contemporary with the construction of the tower. The entrance, at basement level, is now blocked up.

There has been an entrance at first floor level, doubtless reached by a timber stair. The two ditches lie, respectively, 40m and 85m SE of the tower. The inner is very broad and is now some 3m deep; the outer one is a better defined and has surviving scarp 3m high and a counterscarp 1.5m high. The outer ditch lies at the boundary of rough pasture and arable land.

To the SE of the outer ditch, in the arable land, RCAHMS aerial photography in 1978 showed the existence of four further ditches, appearing now only as crop-marks, cutting off the gentle approach to the promontory. Three of the ditches appear to be associated with palisades. Near the NE end of the ditches, where they approach the cliff edge, a complex entrance is visible. Through the three inner ditches the entrance is straight. The gap in the outer ditch is protected by an extension of the ditch from the S, so that the entrance must be approached obliquely from the NE.

Something is known of the history of occupation of the site. It was owned by the Davidson's in the 15th century and passed to the Kennedy's in 1588. The tower bears the inscription 'JK 1603', which probably dates its construction. The site was defended before the construction of the tower; the two medieval ditches may be part of the fortalice known to have existed. The four ditches appearing as crop-marks are certainly of Iron Age date, the defences of a promontory fort.

The area proposed for scheduling measures 140m NNW-SSE and a maximum of 140m ENE-WSW.

The national importance of the monument should be considered in 2 parts. The castle tower now standing has superseded an earlier fortalice, whose substantial earthworks still survive. Their field characteristics and archaeology are important to the theme of the development of defended sites in the medieval period. The Iron Age promontory fort is a significant discovery, and will be an important site in the exposition of the lowland Iron Age. It is of national importance to the themes of Iron Age defence and social organisation, the former particularly on account of an unusual entrance feature on the outer line of defence.