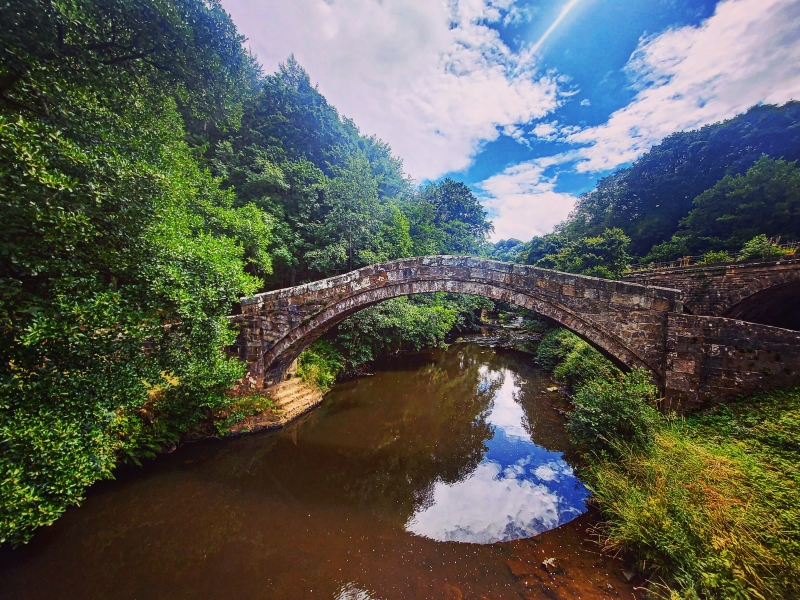 Beggar's Bridge was built in 1619 by Tom Ferris, a wealthy merchant who
became Sheriff of Hull in 1614 and Mayor in 1620. Legend has it that he
was originally the son of a poor Egton farmer and loved Agnes Richardson,
daughter of a squire across the River Esk in Glaisdale. Ferris was
rejected as a suitor and denounced as a beggar by the squire. He thus
resolved to go to sea to seek his fortune, but was prevented from saying
good-bye to Agnes by floods making the river impassable. After making his
fortune in the Caribbean, Ferris returned to marry Agnes and built a
bridge to help future lovers. Beggar's Bridge may incorporate stonework
from a 14th century bridge that had collapsed by 1577.

The bridge is built with roughly coursed sandstone and has a single arch
that is segmental, spanning just over 15m. Below the arch on both
abutments, there are paired corbels which probably supported the temporary
timber work used during the construction of the bridge. The deck is
flagged and is nearly 2m wide between parapets which are 0.75m high. These
parapets have two courses and lean slightly outwards. They may be a later
addition to the bridge as the stone is herring-bone dressed rather than
pecked like most of the rest of the stonework. At the centre of the
downstream, southern parapet is a 1619 date stone which also carries the
heavily weathered initials of Thomas Ferris. The approach ramps are
cobbled and do not have parapets, the side walls forming low kerbs. The
eastern ramp approaches from the north and curves around to meet the
bridge, the western ramp runs straight but splays slightly outwards. The
base of the eastern abutment, facing the river, is stepped with the lowest
step protected against river scour by a modern concrete apron.

Beggar's Bridge is a very fine example of an early post-medieval single
span bridge that has survived effectively unaltered.