A Scheduled Monument in Downham, Lancashire 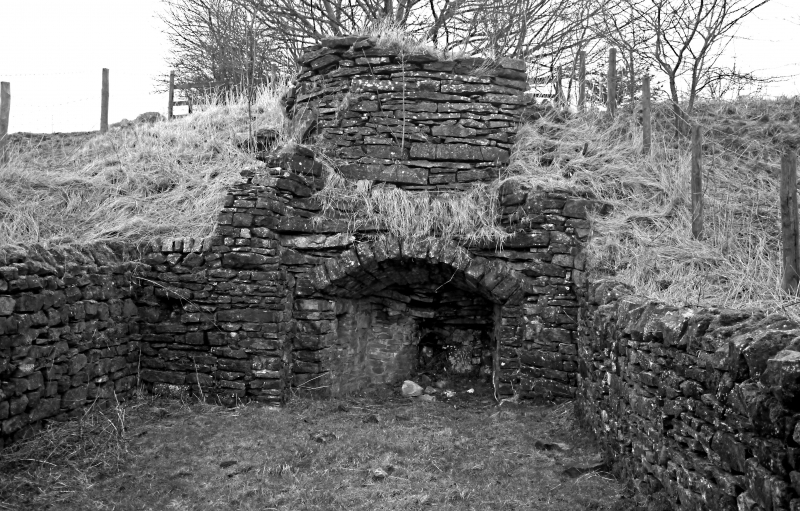 The monument includes Downham lime kiln and an associated lime yard
located on the north side of Twiston Lane 50m north of Smithfield Farm. It
is a single pot flare or draw type kiln which was used to burn limestone.
Flare and draw kilns are structurally very similar and without documentary
evidence considerable difficulty can be encountered when trying to
distinguish these in the field. In the published literature the term flare
kiln is broadly applied to a permanent stone structure that was operated
as an intermittent kiln with fuel and stone kept separate, whereas the
draw kiln is generally taken to be a continuous, mixed-feed kiln (although
a kiln built and charged as a draw kiln could also be operated on an
intermittent basis).

Typically the limestone was tipped into the kiln from the top via the
charge hole then burned using wood, coal or coke as a fuel. The resultant
quicklime, also known as birdlime or slaked lime, was then shovelled out
from the draw hole at the bottom of the kiln. Lime has many uses including
spreading on lime deficient soils to encourage plant growth, the
whitewashing of walls and ceilings of buildings, and concrete and cement
production.

The lime kiln is located at the rear of a stone-walled lime yard which was
used for storage. It is constructed of blocks of coursed limestone rubble
and built into the hillside. There is an arched opening giving access to
the draw hole, also known as the fire hole. Above is a rounded stack
containing the charge hole which is now largely infilled.

All fences, fence posts and gates are excluded from the scheduling,
although the ground beneath these features is included.

Downham lime kiln survives well and is a good example of a small-scale local
commercial lime kiln. It is a rare example in north west England of a lime
kiln complete with an associated lime yard.