A Scheduled Monument in Clitheroe, Lancashire 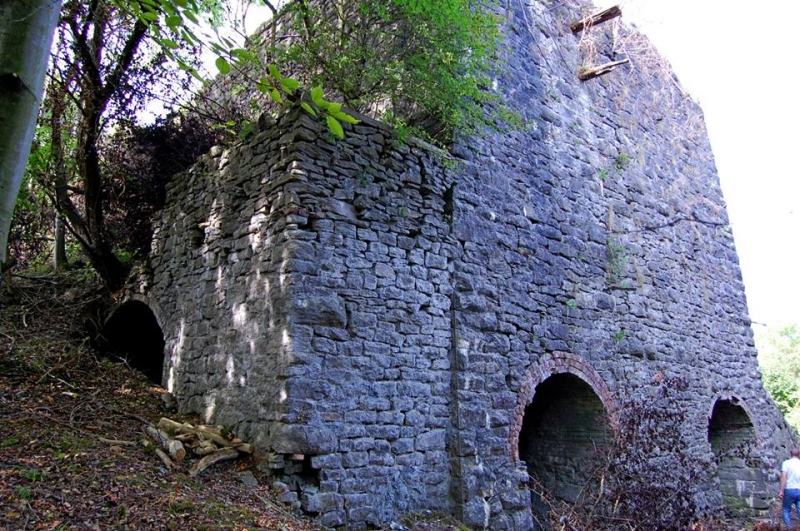 The monument includes the upstanding remains of Bellmanpark lime kilns and
an approximate 90m length of associated tramway, embankment and bridge
abutment along which lime was transported from Bellmanpark Quarry to the
lime kilns, together with the buried remains of a trestle bridge which
stood between the lime kilns and the northern end of the tramway
embankment. It is located on the north side of Chatburn Road 180m north
west of Bellman Farm.

The limeworks were opened in about 1869 by James Carter and William Rowe.
The bank of lime kilns were constructed in 1877 adjacent to the Chatburn
to Blackburn railway line, and the tramway, or `chain road' as it also
known, was built at the same time. Carter and Rowe's partnership split in
1879 with the former retaining the works. In addition to lime burning
Carters also supplied tarmacadam and roadstone. James Carter & Sons ceased
trading in 1960 and the quarries were taken over by Richard Briggs and
Sons Limited, although little further stone was worked.

The lime kilns consist of a massive rectangular bank of four draw kilns up
to 15m high. It is constructed of limestone blocks which encase four
firebrick-lined bottle-shaped furnaces with architectural features such as
arches built of brick. Beneath the bank of kilns are two partly infilled
tunnels through each of which ran a railway branch line from the adjacent
main Chatburn - Blackburn line. Limestone was carried from the quarry in
small trucks along the tramway then across a trestle bridge onto the top
of the bank of kilns. The trucks were driven and controlled by a hawser
cable powered by a static engine which was situated on top of the kiln.
From here the stone was then tipped down charge holes into the kilns and
burned using wood, coal or coke as a fuel. Once burned the resultant
quicklime, also known as birdlime or slaked lime, travelled directly from
the kilns down wooden shutes which still survive in situ, into waiting
railway wagons prior to being transported away. Lime has many uses
including spreading on lime deficient soils to encourage plant growth, the
whitewashing of walls and ceilings of buildings, and concrete and cement
production.

The tramway embankment terminates at a stone bridge abutment which carries
a modern box girder bridge across the road. This modern bridge is not
included within the scheduling.

All fences and fence posts are excluded from the scheduling although the
ground beneath these features is included.

Despite being partly scrub-covered, Bellmanpark lime kilns and part of an
associated tramway 180m north west of Bellman Farm survive well. The kilns
are a rare example of a bank of railside lime kilns which provided access
for railway wagons and still retain, surviving in situ, direct loading
facilities from the kilns into the wagons. Together with part of the
associated tramway the monument remains a good example of the late 19th
century lime producing industry characteristic of the local region.