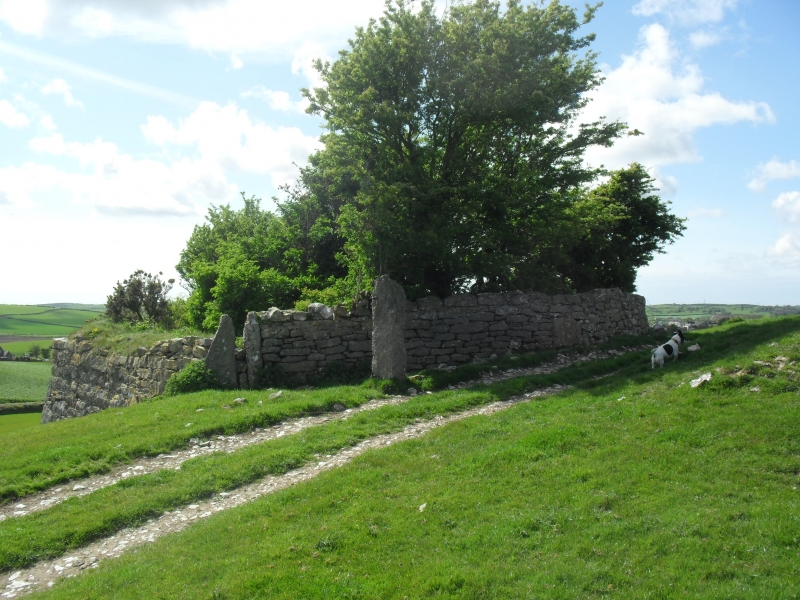 The monument includes a late 18th/early 19th century lime kiln and
associated lime shed located on the southern edge of an outcropping
limestone pavement 680m south east of Scales Green Farm. It is a single
pot draw hole type kiln which was used to burn limetone.

Typically the limestone was tipped into the kiln from the top via the
charge hole then burned using wood, coal or coke as a fuel. The resultant
quicklime, also known as birdlime or slaked lime, was then shovelled out
from the draw hole at the bottom of the kiln. Lime has many uses including
spreading on lime deficient soils to encourage plant growth, the
whitewashing of walls and ceilings of buildings, and concrete and cement
production.

The lime kiln, which is one of three different types in the vicinity, is a
flat-fronted structure approximately 4.5m high which is constructed of
large blocks of coursed limestone rubble and is built into the hillside.
Its draw arch which leads to the draw hole, also known as a fire hole,
measures approximately 2m wide by 3m high. The charge hole, which is
partly choked with scrub and rubbish, is reportedly lined with fire
bricks. Th hole is contained within a small enclosure formed by the later
addition of a low drystone wall which connects with the north west and
south east outer walls of the lime kiln. Attached to the front of the kiln
is a single-storey lime shed originally used as a shelter over the kiln
drawing arch to protect lime from the elements. It is built of blocks of
coursed limestone rubble, with a sloping roof of corrugated iron, and an
entrance on its south western side.

The lime kiln is a Listed Building Grade II.

The lime kiln 680m south east of Scales Green Farm survives well. It is a
good example of a late 18th/early 19th century draw kiln and is a rare
example in north west England of a lime kiln complete with surviving
associate lime shed. Taken together with two other kilns of differing form
in the near vicinity, both of which are the subject of separate
schedulings, it displays the development of lime kiln design and
technology during the late 18th and early 19th centuries.