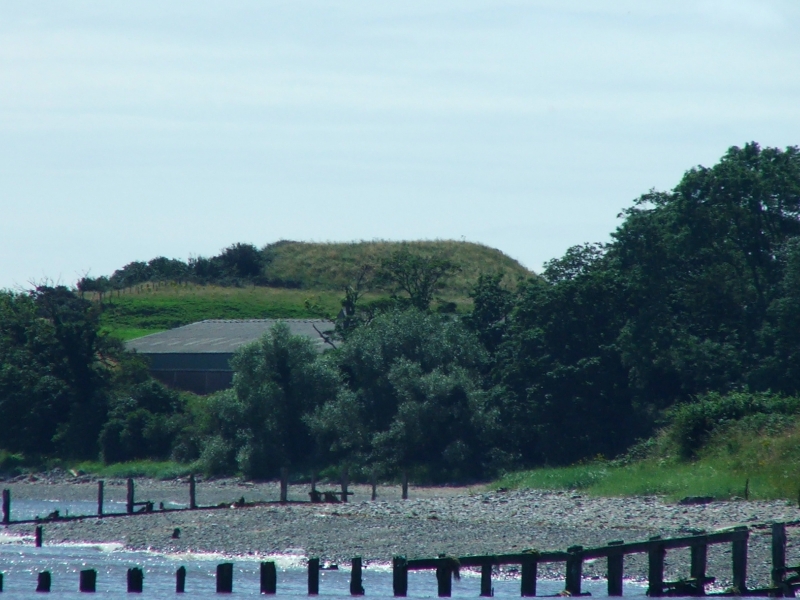 The monument includes the earthwork remains of Moat Hill, the 12th/13th
century Aldingham motte and bailey castle, together with the early 12th
century ringwork upon which the motte was later built. It is situated on a
cliff top on the most prominent headland, other than Humphrey Head, on the
northern coast of Morecambe Bay. It includes an earthen mound, the motte,
which measures approximately 30m in diameter across its flat summit and stands
about 5m high. Surrounding the motte is a substantial ditch 7.5m wide and up
to 3m deep. On the seaward side of the monument, coastal erosion has destroyed
part of the ditch and mound. To the north and north east of the motte and
ditch there is a bailey which is protected by a ditch, now partly infilled,
but measuring c.3.7m wide by 3.5m deep on the north east side.
Limited excavation of the motte in 1968 as a response to erosion revealed
three periods of occupation. The first consisted of an early 12th century
ringwork measuring c.40m in diameter which was defended by an earth rampart
c.3m high. Later in the 12th century the site was converted into a motte and
bailey by infilling and heightening the ringwork to form a motte 4m high and
by adding the bailey. In the late 12th/early 13th century the motte was
further heightened and defended with a vertical timber revetment. The site
appears to have been abandoned in the 13th century probably when the moated
site at Moat Farm, which was home to the le Fleming family until they moved to
Gleaston Castle, was built.
All fences and gateposts are excluded from the scheduling but the ground
beneath these features is included.

Ringworks are medieval fortifications built and occupied from the late
Anglo-Saxon period to the later 12th century. They comprise a small defended
area containing buildings, which was surrounded by a substantial ditch and a
bank surmounted by a timber palisade. Occasionally a more lightly defended
embanked enclosure, the bailey, adjoined the ringwork. Ringworks acted as
strongholds for military operations and in some cases as defended aristocratic
or manorial settlements. They are rare nationally with only 200 recorded
examples and less than 60 with baileys. As one of a limited number and very
restricted range of Anglo-Saxon and Norman fortifications, ringworks are of
particular significance to our understanding of the period.
Despite some destruction by the sea, Moat Hill motte and bailey castle and
ringwork survives reasonably well and remains largely unencumbered by modern
development. Its earthworks in particular remain well preserved. It is a rare
example, confirmed by excavation, of a motte and bailey castle which developed
from an earlier ringwork. Excavation in 1968 was not total and the monument
will retain significant archaeological evidence.