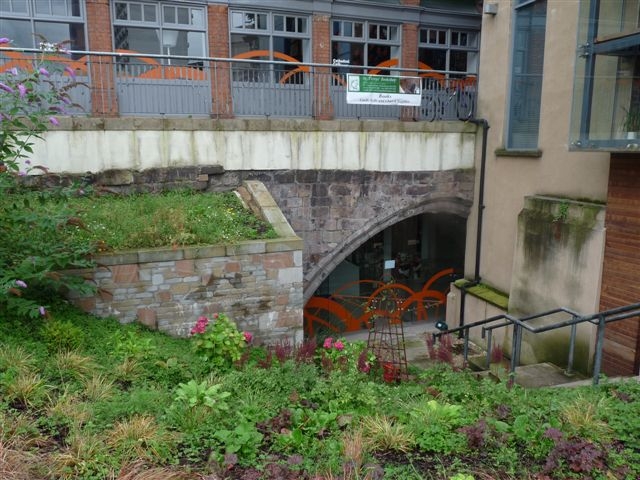 The monument includes the standing and buried remains of a medieval bridge
now incorporated in the basement of the visitor's centre for Manchester
Cathedral. The remains are located between Cathedral Yard and Cateaton
Street. The bridge was originally built to span the Hanging Ditch which
was an improved natural watercourse which led past the church, as the
cathedral then was, and joined the River Irwell to the north. The ditch
was a part of the defences of the medieval town, which lay to the north,
and connected the road from Chester to the town centre. The name of the
bridge is believed to derive from the wooden bridge, previously on this
site, which was suspended over the ditch and was removable.

The bridge is documented from the 14th century and the fabric of the
present bridge dates from the 15th century although there appear to be two
different phases of construction.

The remains consist of two arches of red sandstone, the southern arch
strengthened by three stone ribs. It measures approximately 3m in width
and each arch spans 5.13m. One buttress survives on the eastern side. The
arches rise to 3m above the abutments and central pier.

All the modern walls, concrete capping and the walkway constructed above
the remains are excluded from the scheduling, although the ground beneath
them is included.

The Hanging Bridge immediately south of Manchester Cathedral is a rare
survival of a medieval structure in the city centre. It is particularly
notable for its context, close to the cathedral and is related by
excavation to the Hanging Ditch and the medieval defences of the town. It
survives in good condition and recent refurbishing of the buildings and
environment which overlie and surround the monument have brought the
remains into prominence as an educational and recreational enhancement for
the public.