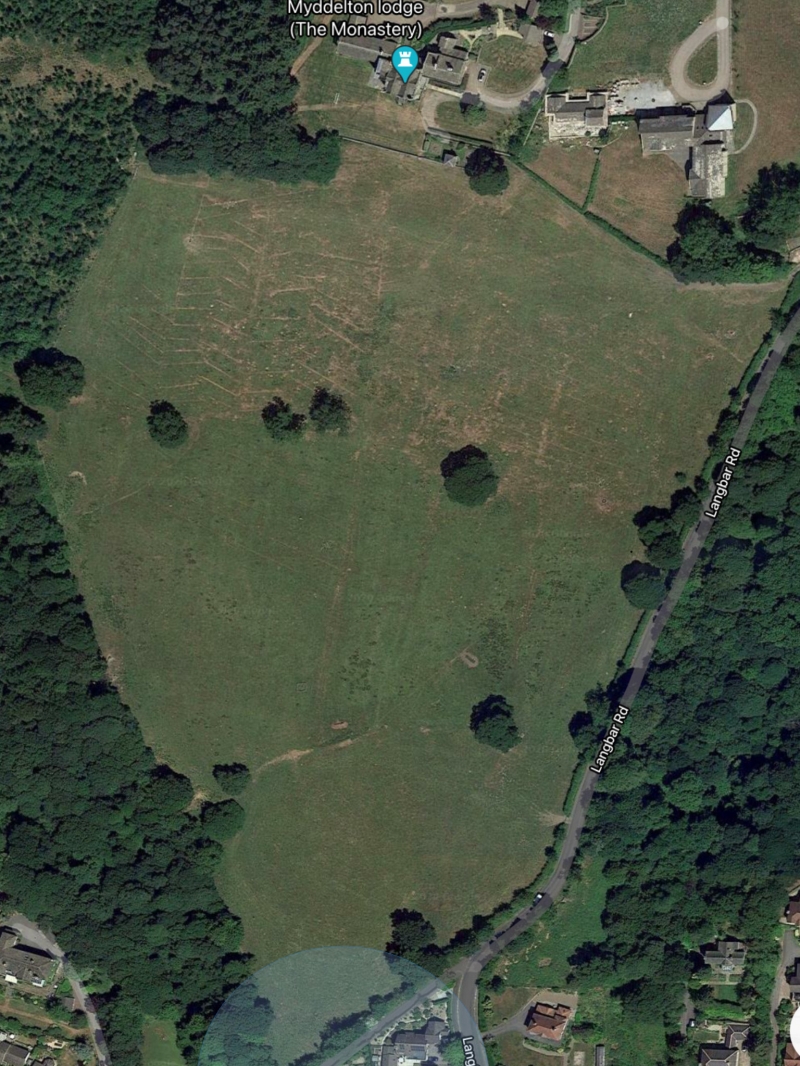 The monument includes the earthwork and buried remains of Scalewra
medieval settlement and part of the associated open field system. The
monument is situated immediately south of Myddleton Lodge on a steep south
facing slope rising from 100m to 150m above sea level.
Scalewra is located within the medieval parish of Ilkley. The
ecclesiastical parish was made up of three townships, Ilkley, Middleton
and Nesfield each of which had subsidiary scattered settlements around the
central village.
Scalewra belonged to the Middleton township, which is first mentioned in
the Domesday Book of 1086 when it is recorded as a berewick of the
Archbishop of York's Otley estate. By the middle of the 12th century it
was held by Hypollitus de Braham, an ancestor of the Middleton Family
which continued to hold the manor until late in the 19th century.
Middleton village still exists but has been greatly reduced in size, even
since the making of the Tithe Map in 1846. Documentary evidence indicates
that Scalewra still existed in 1456 but had split into two parts known as
Overscallwray and Nedirscallewray. Documents record that in 1490 Anne
Middleton received in dower `all their messuage of Scalewray' and a
Middleton marriage settlement of 1587 includes Scaweray, alias Scalwerey'.
Scalewra had certainly disappeared by the time the Tithe Map and early
Ordnance Survey maps were made. It is unclear exactly when Scalewra was
abandoned but it is likely that the settlement was depopulated by the late
15th century as a result of emparking. Myddleton Lodge, the former home of
the Middleton family was built in the 16th century and is situated
immediately north of the monument. It is likely that any remaining
buildings would have been removed when the lodge was built.
The monument survives as a series of earthwork and buried remains. Running
east to west along the northern edge of the monument is a series of
sub-rectangular enclosures marked by low banks. The banks survive to a
height of approximately 0.3m. The enclosures are interpreted as medieval
building platforms with the low banks representing buried walls. Some
parts of the building platforms have been degraded through the
construction of field drainage and sewage pipes. This makes it difficult
to determine the exact layout of the earthworks on the ground surface but
aerial photographs show the overall pattern survives. The buildings would
have been approached from the south by a terraced track which runs from
east to west across the monument. This is most clearly defined at its
eastern end where the trackway opens up to form a junction with Langbar
Road.
Abutting the south side of the trackway and the southern edge of parts of
the area occupied by building platforms are the remains of part of the
medieval open field system. These are visible as part of several furlongs
(groups of lands or cultivation strips) marked by headlands. The
cultivation strips collectively form ridge and furrow and survive to a
height of approximately 0.4m. The ridge and furrow run from north to south
following the natural slope of the ground and the natural drainage
pattern.
All modern fences and walls are excluded from the scheduling, although the
ground beneath these features is included.

Medieval rural settlements in England were marked by great regional diversity
in form, size and type, and the protection of their archaeological remains
needs to take these differences into account. To do this, England has been
divided into three broad Provinces on the basis of each area's distinctive
mixture of nucleated and dispersed settlements. These can be further divided
into sub-Provinces and local regions, possessing characteristics which have
gradually evolved during the past 1500 years or more.
This monument lies in the Lancashire Lowlands sub-Province of the Northern and
Western Province, an area extending from the moorlands of the western Pennines
to the coastal plain with its villages and hamlets. The southern part of the
sub-Province supports high densities of dispersed settlements, but there are
much lower densities further north, in the Craven Lowlands, the Ribble Valley
and the areas around Morecambe Bay. In the Middle Ages the larger, lowland
settlements were supported by `core' arable lands, communally cultivated, with
enclosed fields around them. The uplands contained sheep and cattle farms and
seasonally occupied `shieling' settlements.
The Craven Lowlands local region is drained both eastwards and westwards by
the Aire and Ribble valleys. Now densely settled with small towns, villages,
hamlets and scattered farmsteads, it had a similarly mixed pattern of
settlement in the Middle Ages, as evidenced by the earthworks of isolated
halls, single farmsteads, hamlets and deserted villages.

Medieval villages were organised agricultural communities, sited at the
centre of a parish or township, that shared resources such as arable land,
meadow and woodland. Village plans varied enormously, but when they
survive as earthworks their most distinguishing features include roads and
minor tracks, platforms on which stood houses and other buildings such as
barns, enclosed crofts and small enclosed paddocks. They frequently
include the parish church within their boundaries, and as part of the
manorial system most villages include one or more manorial centres which
may also survive as visible remains as well as below ground deposits. In
the central province of England, villages were the most distinctive aspect
of medieval life, and their archaeological remains are one of the most
important sources of understanding about rural life in the five or more
centuries following the Norman Conquest.
Medieval villages were supported by a communal system of agriculture based
on large, unenclosed open arable fields. These large fields were
subdivided into strips (known as lands) which were allocated to individual
tenants. The cultivation of these strips with heavy ploughs pulled by
oxen-teams produced long, wide ridges and the resultant `ridge and furrow'
where it survives is the most obvious physical indication of the open
field system. Individual strips or lands were laid out in groups known as
furlongs defined by terminal headlands at the plough turning-points and
lateral grass baulks. Furlongs were in turn grouped into large open
fields. Well-preserved ridge and furrow, especially in its original
context adjacent to village earthworks, is both an important source of
information about medieval agrarian life and a distinctive contribution to
the character of the historic landscape. It is usually now covered by the
hedges or walls of subsequent field enclosure.
The earthwork and buried remains of the abandoned areas of Scalewra
medieval settlement immediately south of Myddleton Lodge retain
significant archaeological remains. The earthworks and aerial photographic
records indicate the layout of the settlement. As a whole, the medieval
settlement of Scalewra will add to our knowledge and understanding of the
development and subsequent abandonment of medieval settlement in the area
and its position in the wider landscape.