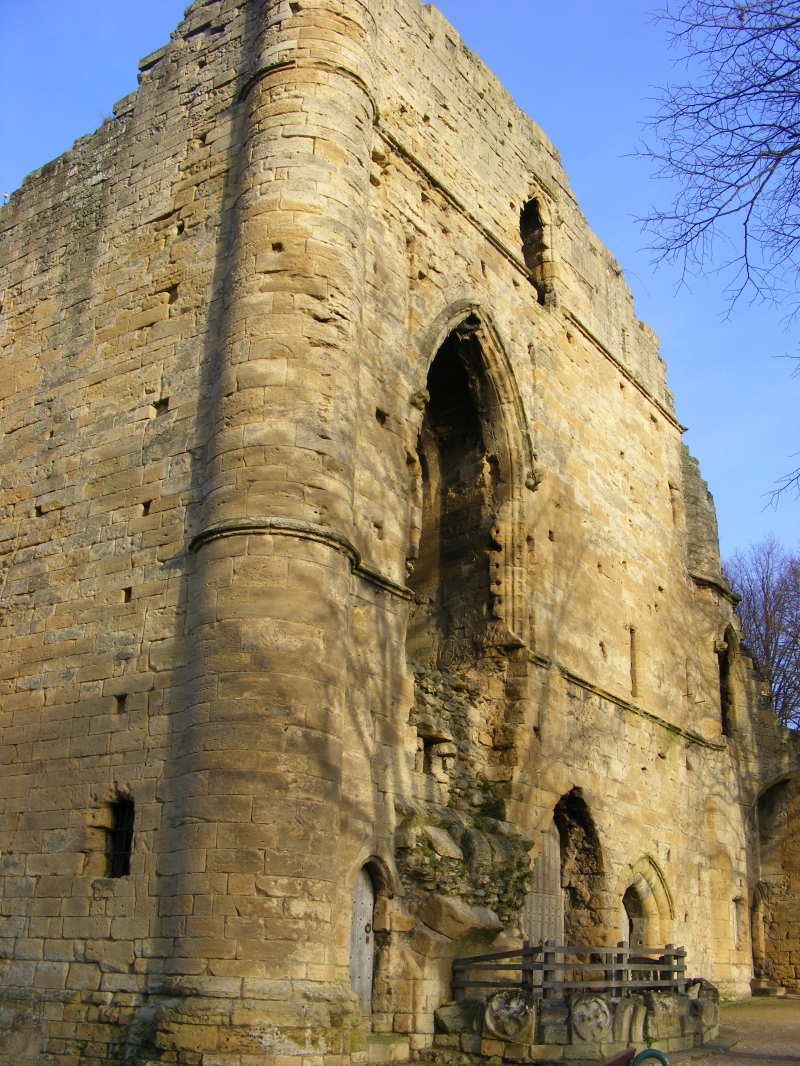 The monument includes upstanding and buried remains of the medieval castle
at Knaresborough. It is located on a promontory to the west of the town
overlooking the River Nidd to the west.

The castle has always been a royal stronghold and was associated with a
number of significant historical figures including; the knights who
murdered Thomas a Beckett, King John, Kings Edward I and II, Piers
Gaveston, King Richard II and John of Gaunt. The earliest known reference
to a castle at Knaresborough is 1130, however the visible ruins date to
the 14th century. In the early 13th century the castle was maintained by
King John as one of his administrative strongholds in the north, and a
major programme of works was started in 1204. A century later King
Edward I in turn began a programme of modernisation of which only the twin
towers of the east gate and fragments of the curtain wall survive. In 1307
his successor King Edward II granted the Honour and Castle of
Knaresborough to his unpopular favourite, Piers Gaveston. During this
period substantial sums were spent on the castle and the great keep known
as the King's Tower was built on the site of an earlier tower. In 1317 the
castle saw military action as part of the unrest against the king and in
1318 was used as a refuge from incursions by Scots raiders.

In 1331 the castle was granted to Queen Philippa as part of her marriage
settlement with King Edward III and thence became a royal residence. In
1372 John of Gaunt acquired the Honour and Castle of Knaresborough and it
became part of the estates of the Duchy of Lancaster, a status held to the
present day. After the accession of King Henry IV in the early 15th
century the castle ceased to be actively used by the monarchy but
continued in its role as the administrative centre for the Honour and
Liberty of Knaresborough. During the English Civil War the castle
supported the Royalist cause. In July 1644 it was besieged by the
Parliamentarians and finally surrendered in December of that year. In
1648, on instructions from Parliament, the castle was thoroughly
demolished. Nearly the entire circuit of the curtain wall and all internal
structures save the courthouse and part of the King's Tower were
destroyed. These buildings survived, as they were required to serve as a
courthouse and prison respectively. The moat on the eastern side was also
filled in. This made the demolition of the castle easier, offered a place
for dumping the rubble and also linked the castle with the town thus
breaking its defensive and military role.

Throughout its active life the castle served as a focus for the
surrounding community, offering refuge in times of danger as well being a
major local and regional administrative centre.

Subsequent to the demolition of the castle most of the usable stone was
removed for buildings in the town, particularly in the 18th century. In
the 18th and 19th centuries, along with other local attractions, the
castle became a popular site for visits by the developing tourist trade
centred on the nearby spa town of Harrogate. This use as a leisure amenity
continued at the end of the 19th century when landscaping to form pleasure
gardens to celebrate Queen Victoria's jubilee was commenced. Since then
the castle grounds have remained in public use for leisure and recreation.

The castle displays a pattern typical of the medieval period; an
impressive tower, walled enclosures known as the inner ward and outer ward
and an external moat. The monument is dominated by the ruins of the King's
Tower, which is located in the northern part of the monument directly
overlooking the river. It is a massive stone structure which originally
contained four storeys: a vaulted basement, a vaulted chamber at
ground-floor level, a tall first floor hall and a second floor chamber.
The two upper floors were badly damaged in the 17th century so that only
about half of the walls and only the floor of the hall survive. The tower
housed the residential rooms of the lord, including the domestic chamber,
chapel and the hall. Many architectural details such as windows, doorways,
stairs and roof and floor supports survive, which along with documentary
sources provide evidence of the original internal arrangements. Detailed
analysis of the surviving architecture and comparisons with castles
elsewhere has shown that the hall was an imposing space whose scale and
layout was intended to dominate and impress visitors. Access was via a
grand stairway on the eastern side of the tower, which led the visitor
past a series of ostentatious architectural features which further
expressed the power and status of the lord. Such displays of power became
a common theme of castle architecture from the 14th century onwards and
Knaresborough is one of the earliest examples of this transition in
military architecture away from a predominately defensive and military
role towards comfort, elegance and the display of prestige and power.

The tower was located on one side of the inner ward which occupies the
western part of the castle. This was the enclosure in which wider domestic
and administrative activities took place. Structures located here are
known from the 16th century survey to have included the Great Hall,
kitchen, larder and the courthouse. This last building still survives and
its medieval origins can be clearly seen.

The inner ward was separated from the outer ward by a stone wall, part of
which survives as the rear wall of the courthouse. The remainder of the
wall no longer survives above ground although its course is known from
geophysical survey and excavations in the 1920s. The outer ward was the
area in which the economic and industrial needs of the castle were
supported. Surveys of the 16th century indicate that activities here
included milling, brewing, baking, metalworking and the stabling of
horses. Excavations carried out to the south east of the court house
complex in the 1920s revealed stone footings for buildings. One of these
structures was built against the curtain wall and the remains of a total
of 14 hearths and furnaces were found showing that it was used for
smelting and metalworking. Also in the outer ward were two sallyports.
These were underground tunnels which were used for secret access to and
from the castle. They were cut through the rock and were large enough to
accommodate riders on horseback. Surrounding the outer ward was the main
curtain wall. This was a massive stone wall buttressed at intervals by
towers. Little of the wall now survives above ground. Access to the
castle was via two gateways leading into the outer ward. One of these at
the eastern side of the castle still has a pair of gatehouse towers
standing to much of their original height. The second entrance was located
in the outer ward immediately to the east of the King's Tower. The
gateways were defended by fortified gatehouses which by the 14th century
were imposing structures designed to impress as well as to defend access.
The gateways were accessed by bridges spanning the moat. Remains of these
bridges and their footings will survive below ground. Surrounding the
castle on all but the western side was a massive dry moat which measured
up to 30m wide. Excavations in the 1920s showed that the southern arm of
the moat, adjacent to the sallyport, was at least 3.5m deeper than the
current ground level. The northern arm of the moat was landscaped in the
19th century as part of the creation of the pleasure gardens and the
eastern arm of the moat was filled in during the demolition of the castle
after the civil war. However it is considered that significant remains of
the moat will survive. There was no moat on the western side of the castle
as the sheer river cliff was sufficient defence.

A number of features are excluded from the scheduling. These are: the
courthouse and prison and old school building which are Listed Buildings
Grade II, the surface of paths, hard standings and the car park, free
standing modern walls (not including retaining walls), hand rails,
benches, lights, signs, ticket machine, the war memorial, gates and
kerbstones although the ground beneath these features and/or the surfaces
to which they are attached is included.

Despite partial demolition significant remains of Knaresborough Castle
survive. In addition to the ruins the below ground remains of the earlier
castle are known to survive. The castle has been extensively studied and
evidence of significant developments in military architecture are preserved.
The castle also featured heavily in the history of medieval England. Taken
together the remains at Knaresborough provide important evidence of the
development of castle design as well as the history of a major royal castle in
the north of England.