A Scheduled Monument in Spofforth with Stockeld, North Yorkshire 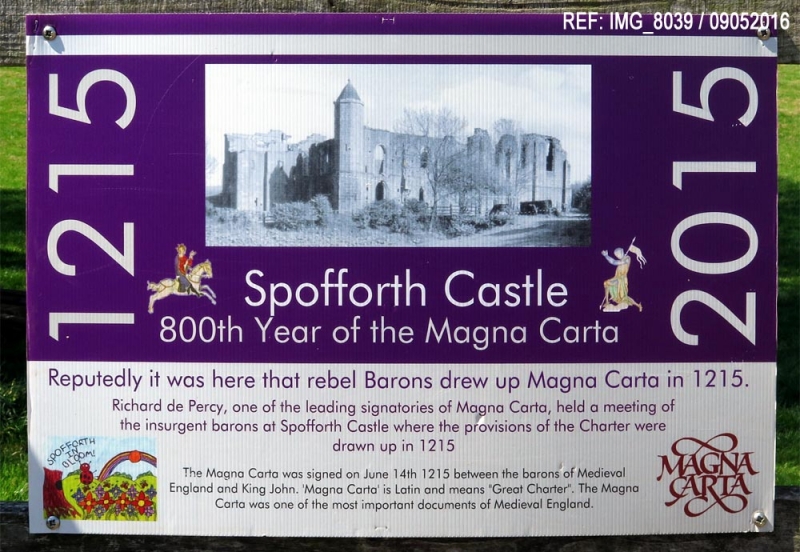 Spofforth Castle is located on a low hill to the west of Spofforth village.
The monument includes the ruins of the west range of the 13th century manor
house and the buried remains of other buildings, including those of an earlier
11th century residence.
The extant west range is of two storeys, the oldest part being the undercroft
which is early 13th century. Above this is the great hall and the private
rooms of the lord and his family, built and modified in the 14th and 15th
centuries after licence to crenellate was granted to Henry Percy in 1309. The
plan of the west range is a parallelogram with an extension at the north-east
corner and a polygonal stair turret and spire at the north-west. The back of
the building is set against rock so that the rear entrance leads directly into
the upper floor containing the hall and private rooms. The undercroft
consists of three rooms, later subdivided into four, with the kitchen
occupying the north-west corner room and containing two large fireplaces.
Fragments of other buildings indicate that the standing remains formed one
side of a quadrangle stretching to the east. Earthworks in the field to the
east, and cropmarks showing up on aerial photographs, show the location of its
foundations. Underlying the deposits of the later medieval house are those of
the Norman foundation.
The first house on the site was built some time after 1067 by William de
Percy, a favourite of William the Conqueror. The Percys were an important and
influential family, and William's gift to the family numbered eighty-six
lordships in Yorkshire, of which Spofforth was one. It remained the principal
seat of the Percys until the 14th century, when Henry Percy bought the manor
of Alnwick. As his family increased in power and influence in the north-east,
so the residence at Spofforth lost favour and fell into disrepair.
During the Wars of the Roses, after the Battle of Towton in 1462, it was fired
by Richard Neville, Earl of Warwick, and remained neglected until restored in
1559. Records suggest that it was last inhabited in 1604 and it was slighted
some years later during the Civil War. The monument is now in State care and
is a Grade II* Listed Building. On the south-east side the monument extends to
the inside of the field fence/wall and hence the recently constructed Manor
Garth road and adjacent housing are not included in the scheduling.
Excluded from the scheduling are all English Heritage fittings such as
railings, ticket office, grilles and notices, all fencing and modern walls
around the site and the surface of the path leading from the east. The ground
beneath these features is, however, included.

Magnates' residences are high-status domestic residences dating from the
Norman Conquest and throughout the Middle Ages, in some cases with Saxon
antecedents. They were the palaces of royalty, bishops and the highest
nobility, and generally comprise a great hall, private chambers, service
rooms, kitchens and accommodation for retainers arranged round a single or
double courtyard. Usually they were built of stone and served as both luxury
homes and impressive venues in which to meet and entertain visiting
dignitaries. They frequently had little or nothing in the way of defences and
no military function. Since they belonged to only the top echelons, magnates'
residences are relatively rare monuments with less than 250 throughout the
country for the whole of the medieval period. As such, and as important
architectural monuments in their own right, they are particularly important
for the study of medieval society and all sites exhibiting good survival will
be identified as nationally important. Spofforth Castle's importance lies in
the good survival of standing remains and extensive archaeological deposits,
and in its connections with one of the most important noble families in
medieval England, the Percys.