A Scheduled Monument in Chetwynd Aston and Woodcote, Telford and Wrekin 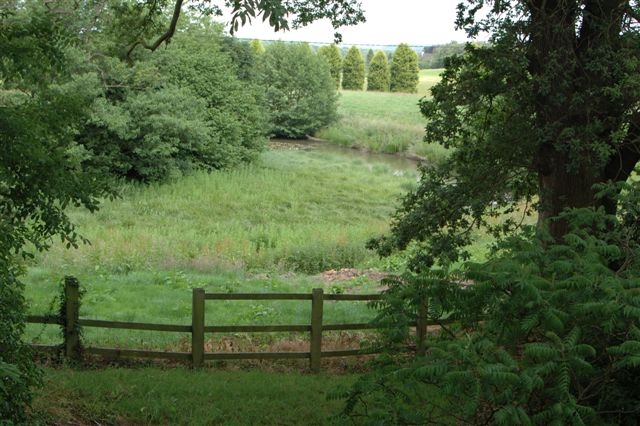 The monument includes the earthwork and buried remains of an enclosed Iron Age
farmstead, situated in an area of undulating land next to a pronounced
curvilinear gully and an adjoining bank, both of which are natural features of
glacial origin. The enclosed farmstead was discovered during aerial
reconnaissance, and it was the subject of a detailed archaeological
investigation in 1990. This investigation included topographical and
geophysical surveys of the site, undertaken to record the upstanding
earthworks and to confirm the extent of the surviving buried features. This
information was used, in conjunction with the evidence from aerial
photographs, to provide an accurate plan of the defences forming the
enclosure. Selective excavation was also carried out as part of this
investigation.

The overall dimensions of the farmstead are about 160m north west - south east
by 230m south west - north east. The internal area is pear-shaped and measures
approximately 65m by 110m. It is defined by a bank, which has been reduced by
ploughing and which now stands to a height of 0.2m. In front of this bank is a
ditch about 4m wide, which has been infilled but survives as a buried feature.
Around the northern half of the enclosure additional lines of defence were
constructed and consist of two principal ditches, both about 4m wide,
separated by banks. These outer ditches have also been infilled and survive as
buried features, but ploughing has reduced the height of the banks which are
no longer visible as earthworks. The natural gully was incorporated into the
defensive circuit, and a ditch was dug along its base.

The principal entrance to the farmstead appears to have been from the south
west, where there is a causeway, approximately 12m wide, flanked on either
side by ditches which connect with the concentric ditches forming the
enclosure. The partial archaeological excavation of the enclosure ditches has
shown that they are all about 2m deep, with waterlogged deposits at their
bases which contain organic remains. The pollen recovered from these deposits
indicates that in the Iron Age the surrounding landscape was largely open
grassland. The archaeological excavavion of part of the south western entrance
revealed the well-preserved remains of a cobbled surface of probable Iron Age
date. Geophysical survey also detected another possible entrance at the north
eastern end of the site, surviving as a buried feature. Limited excavation
within the interior found the remains of two curving gullies, thought possibly
to be the eavesdrip gullies of roundhouses.

All fence posts and modern walls, the utilty poles, the polytunnels and the
associated paths and paved areas, the oil storage container and the brick and
concrete base on which it stands, together with the garage adjacent to The
Croft are excluded from the scheduling, although the ground beneath all these
features is included.

The size and form of Iron Age enclosed settlements vary considerably from
single farmsteads up to large semi-urban oppida. Farmsteads are generally
represented by curvilinear enclosures containing evidence of a small group of
circular domestic buildings and associated agricultural structures. Where
excavated, these sites are also found to contain pits or rectangular post-
built structures for the storage of grain and other produce, evidence of an
organised and efficient farming system. The surrounding enclosures would have
provided protection against cattle rustling and tribal raiding.
In central and southern England, most enclosed Iron Age farmsteads are
situated in areas which are now under intensive arable cultivation. As a
result, although some examples survive with upstanding earthworks, the
majority have been recorded as crop- and soil-marks appearing on aerial
photographs.

Although the enclosed Iron Age farmstead at Pave Lane has been affected by
later cultivation it remains a good example of this class of monument. Of the
lowland Iron Age farmsteads recognised from the air in the West Midlands of
England, multi-ditched enclosures are comparitively rare in relation to those
settlements defined by one or two ditches.

At Pave Lane the archaeological investigation of the site, which included a
limited excavation of the defences and the interior, has demonstrated that
significant buried deposits survive here. The deposits within the enclosure
ditches are waterlogged, and can be expected to preserve organic remains,
which will provide evidence about the contemporary environment and the use of
the surrounding land. The site also offers significant potential for the
preservation of other contemporary organic remains, including structural
timbers, artefacts and domestic refuse, providing a valuable insight into how
a farming community lived in this area during the Iron Age.