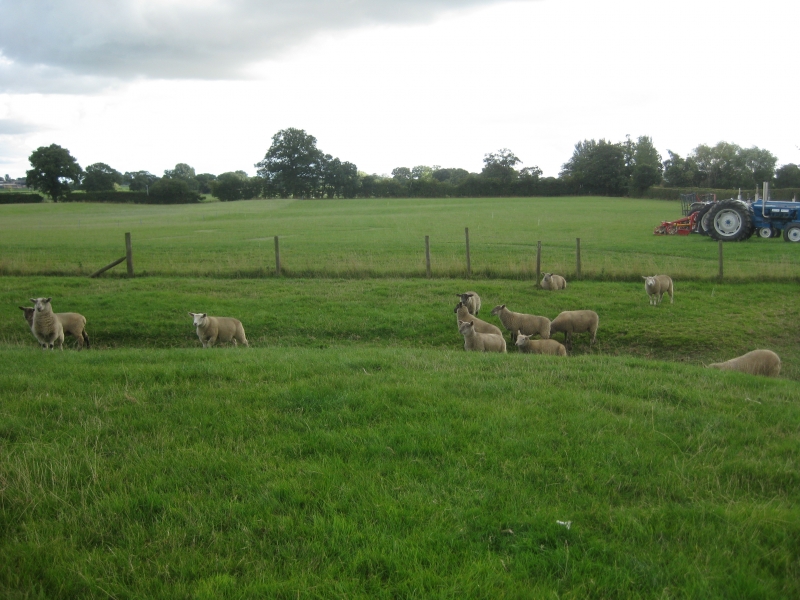 The monument includes the earthwork and buried remains of a small moated site
situated within a large moated enclosure. It stands in an area of undulating
land and has been constructed on a gentle south facing slope. The large moated
enclosure has external dimensions of approximately 110m east-west by 120m
north-south. The moat arms are essentially dry and define a rectangular area
which measures approximately 75m east-west and 94m north-south. This
enclosure, with the exception of much of the western arm, has been reduced by
ploughing and infilled with soil and modern building rubble. The arms of the
moat are between 9m and 12m wide and some of the material excavated has been
used to create outer banks which run parallel with the southern and eastern
arms. These banks are about 4m wide and survive to a maximum height of 0.7m,
and have also been reduced by ploughing. Access to the enclosure was by means
of a 4m wide causeway, located slightly to the south of the mid point of the
western arm.

A small, square moated site is situated close to the eastern side of the large
enclosure. It defines a rectangular island, which measures approximately 27m
north-south and 30m east-west. The moat arms are between 10m and 13m wide, all
contain water, except the southern arm which has been partly infilled. The
eastern arm has been extended in order to connect this moat with the outer
one. Material excavated from these moats has been used to create a raised area
in the north eastern corner of the outer moated enclosure. The thin strip of
ground between the two moats has been similarly heightened. In the northern
part of the large enclosure two oblong ponds have been constructed. They
appear to define a narrow walkway to control access onto the inner island. The
eastern pond has been infilled but survives as a buried feature.

There are a number of features which are excluded from the scheduling, these
are: modern fences, gates and modern garden features; the ground beneath all
these features is, however, included.

The double moated site at Northwood Hall is one of only two such sites in
Shropshire: a moated site situated within a larger moated enclosure. Despite
disturbance from modern agricultural activities it remains a good example of
this class of monument. The moated island and its enclosure will retain
structural and artefactual evidence of the buildings that once stood on the
site, which together with the artefacts and organic remains existing in the
moats will provide valuable evidence about the occupation and social status of
the inhabitants. Organic remains surviving in the buried ground surface under
the outer banks, below the raised parts of the interior and in the moats will
also provide information about changes to the local environment and use of the
land before and after the moated site was constructed.