A Scheduled Monument in Wharton, Cumbria 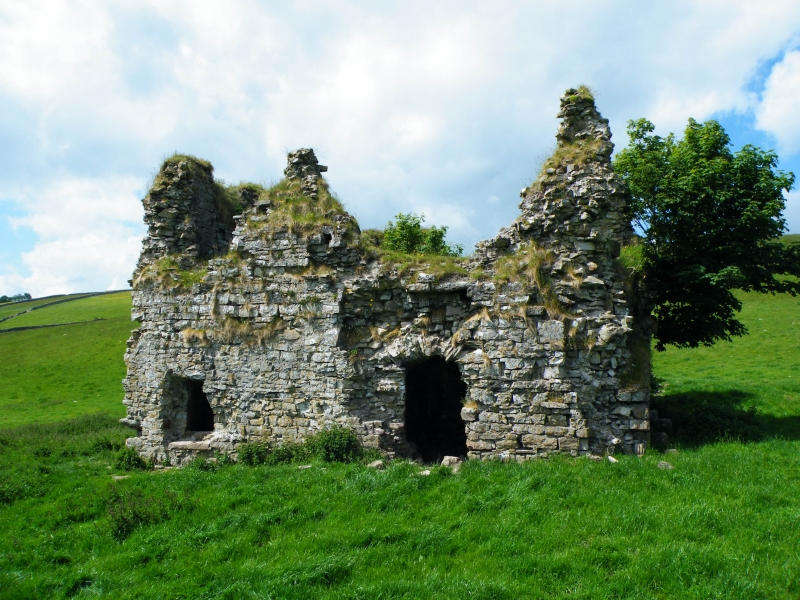 Church of England Parish: Kirkby Stephen with Mallerstang and Crosby Garrett with Soulby

The monument includes the upstanding and buried remains of Lammerside Castle
medieval tower house, located on the western side of the River Eden
approximately 4km south of Kirkby Stephen. It includes the upstanding remains
of a 14th century tower or wing which originally formed part of the building's
central core, together with the earthwork remains of buildings to the north
and south of the tower and a barmkin or wall which enclosed a yard to the west
of the tower. The castle was occupied by a branch of the Warcop family, but is
thought to have been abandoned by the 17th century.
The tower is constructed of coursed, squared rubble, measures approximately
14m by 11m, and survives to two storeys high. The ground floor is divided by a
cross wall running east-west into two main portions, and the southern portion
is again sub-divided into three apartments. These ground floor rooms are or
were covered by barrel-vaults. A central corridor runs through the building
from north to south at the southern end of which there is an original
doorway with architectural features such as chamfered jambs, two-centre arch
and a draw-bar hole. Immediately to the west of this entrance there is a
blocked doorway with a square head. The north wall has a doorway to the
central corridor and traces of the semi-circular recess of a newel staircase
which led to the upper floor. Towards the eastern end of the north wall there
is the stump of the wall of a now demolished adjoining building, and next to
it there is a small recess. The east wall has two windows while the west wall
contains a window and two square-headed loop-lights. The upper storey is now
considerably ruined but originally provided the main living areas for the
occupants. It has a single large room or hall with traces of a fireplace in
its northern wall to the north of the main cross wall, and two small chambers
and a garderobe to the south of the cross wall. Traces of the foundations of a
building of the same width as the tower can be seen to the south of the tower,
while to the north of the tower there are traces of a slightly narrower wing.
On the tower's western side there are the earthwork remains of a barmkin wall
which would have enclosed a yard. In the north western corner of this yard
there is a small building platform. Traces of an L-shaped wall extend
southwards for a short distance from the south face of the barmkin wall.
Lammerside Castle is a Listed Building Grade II.
All fence posts are excluded from the monument, although the ground beneath
these features is included.

Despite the demolition of the north and south wings of Lammerside Castle
medieval tower house, substantial elements of this monument survive. These
include the upstanding remains of the tower and the earthwork remains of its
wings, together with the earthwork remains of a barmkin wall, yard and a
building platform. The monument will add greatly to our knowledge and
understanding of the wider medieval settlement and economy of this area.