A Scheduled Monument in Whittington, Shropshire 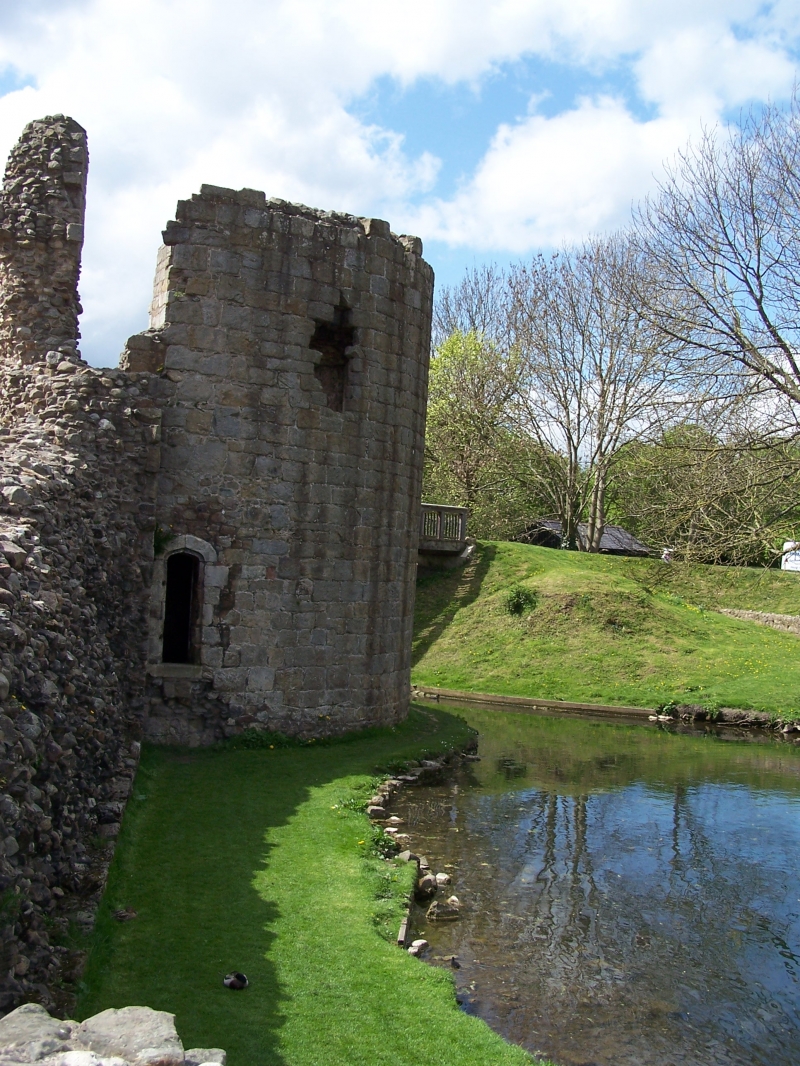 The monument is situated within the village of Whittington and includes the
standing, earthwork and buried remains of Whittington Castle, a motte and
bailey and an enclosure castle, and the earthwork remains of its associated
water control features. The standing remains of the castle are a Listed
Building Grade I.
The original castle at Whittington was a motte and bailey which was replaced
by a fortified keep in the early 13th century. The castle defences were
strengthened by a series of banks and ditches to the west and south, a moat to
the east and an area of marshland to the north. The southern defences
originally continued eastwards but this area has been affected by modern
development and is not therefore included in the scheduling.
Documentary sources indicate that the castle was fortified against Stephen in
1138 and that Henry II granted aid to Roger de Powys for the castle's repair
in 1173. Fulke Fitz Warine was confirmed in possession of Whittington Castle
by King John in 1204 and granted a licence to crenellate in 1221. Two years
later it was unsuccessfully besieged by Llewellyn the Great, suggesting that
the castle was fully defensible by this time. The castle was decayed, but
nearly entire, when surveyed in 1545; it was later granted to the Earl of
Arundel, but subsequently fell into ruin and was robbed for its materials. In
the late 18th century the castle site was laid out as a garden with
pebble-laid pathways and brick structures and the outer gatehouse was
repaired. The buried features of this garden provide interesting evidence for
the 18th century reuse of the site and are included in the scheduling.
The oval flat-topped mound in the central part of the site is believed to
represent the remains of the original motte castle, with a triangular-shaped
bailey immediately to the north and west. The buildings of the late 11th or
early 12th century castle are thought to have been timber structures which
were subsequently replaced by stone built ones. The inner court is located to
the east of the motte and consists of a rectangular raised platform, enclosed
by a curtain wall with the remains of semi-circular towers at each corner and
an additional tower at the north west angle, which formed part of the inner
gatehouse. The foundations of several buildings have been located during
excavations within the inner court, including those of a central rectangular
keep and a hall building to the east.
To the north west of the inner court is a small outer court which occupies the
south eastern corner of the original bailey. A small mound at the southern end
of the latter is thought to have supported the northern end of the bridge
which originally provided access into inner court. The outer court was partly
defended by a curtain wall, a short length of which survives along the north
east side of the court together with the ruins of two semi-circular towers,
and by a moat to the east and south east, which remains waterfilled. It would
have originally been occupied by additional buildings, including stables and
ancillary buildings, the buried remains of which will survive beneath the
ground surface.
At the eastern end of the outer court is the outer gatehouse, built of
regularly coursed and dressed grey limestone, which has been restored several
times since the 1800s. It consists of two D-shaped towers that flank the
arched entranceway and is approached by a coursed limestone rubble bridge.
A timber-framed cottage, thought to date from the 16th century but with later
alterations, has been built behind the north tower.
The 19th century extension to the south gatehouse tower, as well as the
gatehouse and cottage, which are both Listed Buildings Grade I, the modern
toilet block, the modern staircase to the inner court, all fence posts,
floodlights, concrete and tarmac surfaces, modern walling, electricity poles
and support cables and the footbridge across the stream are all excluded from
the scheduling, although the ground beneath these features is included.

Whittington Castle is a well preserved example of an enclosure castle which
evolved from its origins as a motte and bailey castle into a compact fortified
stronghold. Buried structural and artefactual evidence relating to the
original castle will contain valuable information on the less well documented
early history and occupation of the site, whilst partial excavation has
recovered evidence for the later phases in the castle's development during the
13th century. The importance of water as a medieval defensive feature is
clearly seen within the marshland, in particular, contributing to the
fortification of the castle. In addition, the accumulated silts within the
ditches and the moat provide conditions suitable for the preservation of
environmental evidence and artefacts relating to the castle's occupation and
the landscape in which it was set.
The buried remains of the late 18th century ornamental garden centred on the
castle ruins will provide unusual information reflecting the contemporary
preoccupation with archaeological sites and antiquity. As a site open to the
public, Whittington Castle is a valuable educational resource and public
amenity.