A Scheduled Monument in Selattyn and Gobowen, Shropshire 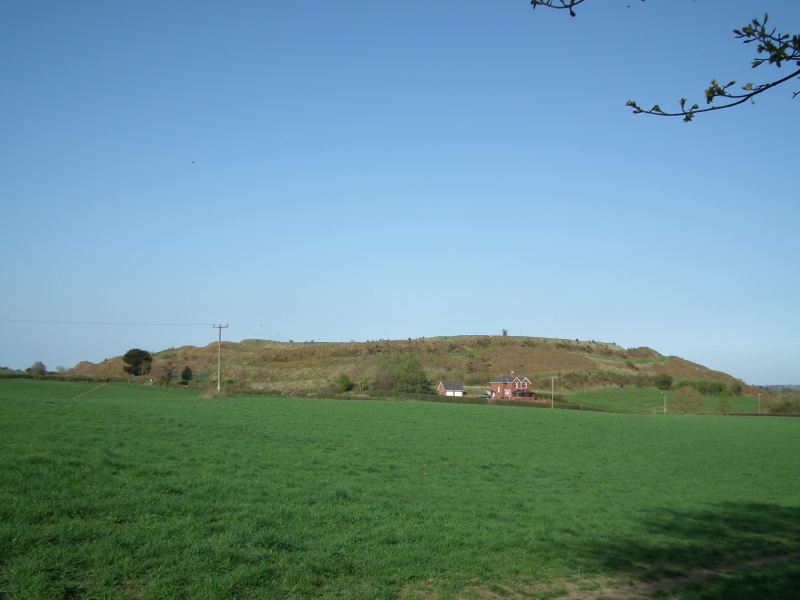 Large multivallate hillforts are defined as fortified enclosures of between
5ha and 85ha in area, located on hills and defined by two or more lines of
concentric earthworks set at intervals of up to 15m. They date to the Iron
Age period, most having been constructed and used between the sixth century BC
and the mid-first century AD. They are generally regarded as centres of
permanent occupation, defended in response to increasing warfare, a reflection
of the power struggle between competing elites.
Earthworks usually consist of a rampart and ditch, although some only have
ramparts. Access to the interior is generally provided by two entrances
although examples with one and more than two have been noted. These may
comprise a single gap in the rampart, inturned or offset ramparts,
oblique approaches, guardrooms or outworks. Internal features generally
include evidence for intensive occupation, often in the form of oval or
circular houses. These display variations in size and are often clustered,
for example, along streets. Four- and six-post structures, interpreted as
raised granaries, also occur widely while a few sites appear to contain
evidence for temples. Other features associated with settlement include
platforms, paved areas, pits, gullies, fencelines, hearths and ovens.
Additional evidence, in the form of artefacts, suggests that industrial
activity such as bronze- and iron-working as well as pottery manufacture
occurred on many sites.
Large multivallate hillforts are rare with around 50 examples recorded
nationally. These occur mostly in two concentrations, in Wessex and the Welsh
Marches, although scattered examples occur elsewhere.
In view of the rarity of large multivallate hillforts and their importance in
understanding the nature of social organisation within the Iron Age period,
all examples with surviving archaeological potential are believed to be of
national importance.

Old Oswestry hillfort is a fine example of this class of monument, which has
two complex entrances and illustrates several phases of development and
occupation. The interior of the hillfort will retain evidence for occupation
including post holes, foundation trenches, and storage and refuse pits, as
well as environmental and artefactual evidence for the domestic and industrial
activities which took place there. The surrounding banks will retain details
of their method of construction and subsequent modifications, and will have
sealed beneath them environmental evidence for land use immediately prior to
each phase of construction. The enigmatic sunken features on the west side of
the hillfort will also preserve evidence for their construction and function,
and their stratigraphic relationship with other elements of the site. The
entrances will retain evidence for the sequence of their development, and for
the revetments and palisades with which they will have been strengthened. The
adjacent stretches of Wat's Dyke will similarly preserve evidence for their
date and method of construction and the stretches of earthen bank will protect
evidence for medieval land use prior to the dyke's construction. The reuse of
the hillfort within the Wat's Dyke system illustrates the continuity of
defensive structures in the vicinity from the prehistoric through to the
medieval period.
Old Oswestry is a prominent local landmark, is open all year to the public and
is in the care of the Secretary of State. A public footpath follows the
northern stretch of Wat's Dyke, allowing the relationship of the two
earthworks to be appreciated.